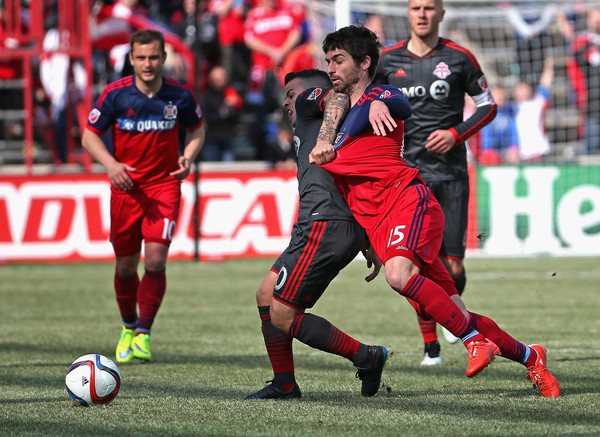 Toronto FC have ten games left on the season; ten games to solidify their hold on the Eastern Conference, and (currently) the Supporters Shield – not to mention that first round bye in the playoffs (wouldn’t that be nice?).  Out of these next ten games, eight are against Eastern Conference teams – including all three of this year’s games against the cheesemakers – only games against the Earthquakes (Sept. 9 at home), and the Galaxy (Sept. 16 away) see them play out of conference; and they’ve an even split between home and away games over this last stretch as well – no season ending home stands to build on this year.

First up down the stretch is this evening’s match against the Chicago Fire at Toyota Park in beautiful Bridgeview (I’ve no idea if it’s beautiful, I just like the alliteration), against one of their conference rivals and potential supporters shield contender. The Fire are having a remarkable season – all the more so given how terrible they were last year – but MLS is a funny league and worst to first (or close to first) happens and the Fire have built that turnaround on the league’s best home record of 10-0-1.  Yep, ten wins and no losses, not intimidating at all, nope, not one bit.  Yes TFC are one of the best road teams in the league, but this isn’t the Fire of last year (when Toronto recorded their only win at Toyota Park).

On the plus side for TFC in tonight’s game is Chicago’s current less than sparkly form – they’ve only won once in their last six games and got blown out by the cheesemakers 3-0 on Wednesday.  They’re also suffering through some defensive injuries (most of their usual starters are out injured), no to mention having their usual starting keeper Jorge Bava out as well – things might be looking up for Toronto!  However, while they may be less than solid on the defensive side, it’s Chicago’s attack that is worrisome – they boast two of the league’s best goal scorers in Nemanja Nikolic and David Acaam, their midfield is arguably as dangerous as Toronto’s, and they score a lot of goals at home.  Toronto will need to be aware of the counter from the Fire and neutralize their midfield creativity in order to come away with a point.

As I said on this week’s podcast ep, this should be one of those games that are exciting to watch, the two teams match up fairly well, there’s an expectation of goals – or at least the potential for goals, as well as the midfield battle which should be delightful to watch.  I called for a 2-2 draw and I’m sticking with that.

*(The Vocal Minority cannot guarantee any appearances by Ms. LeBrock)