Home » Analysis & Opinion » Toronto FC vs Colorado Rapids: CCL Leg 1; Can TFC Start The Year Off On A High Note?

Toronto FC vs Colorado Rapids: CCL Leg 1; Can TFC Start The Year Off On A High Note? 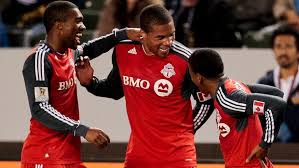 They’re back!  After the heady highs of the 2017 season Toronto FC are back in action this evening for the first leg of the Concacaf Champions League in the exotic clime of Commerce City, Colorado (ooh, so exotic) as they take on the Colorado Rapids (Zzzzzz…sorry, what?) for this round of the CCL.  It’s been five long years (OK, five and a half), since Toronto FC last participated in the Concacaf Champions League – way back in October of 2012 when they fell to Santos Laguna in the group stage.  That loss ended a five year run by TFC in the tournament, including that delightful trip to the semi-finals the previous year (thanks Aron) that had us all hoping that we’d be the team to break the CCL curse for MLS teams – but alas.  Regardless of that it is so exciting to be back in the CCL, it’s been some of the most exciting soccer we’ve been able to watch as TFC fans – plus who doesn’t love watching your team with 5000 (though I expect a few more of you this year) or so of your fellow fans? Ah the memories…

Toronto’s 2017 season will be hard to replicate – let alone top with success in the CCL – but a mostly unchanged team with both players and management full of confidence for this year has them looking at the CCL title as not only possible but attainable.  TFC have gone through some changes in the off season, losing most notably Steven Beitashour, Raheem Edwards, Armando Cooper and Benoit Cheyrou.  In their place they’ve signed Gregory van der Wiel and Auro Alvara da Cruz – with rumours of one or two more acquisitions on the way (Ager Aketxe anyone?) – to keep the team at a high level.  Van der Wiel and Auro look to be natural replacements for Beitashour which means rightback alternate Nicolas Hasler will be utilized more as a midfielder than a defender in the coming season.

But for tonight’s game there will be some lineup changes due to van der Wiel and Chris Mavinga staying back in Toronto (along with Tosaint Ricketts).  The loss of both van der Wiel and Mavinga are the most worrisome – especially Mavinga – as defense when playing on the road is critical. So who do we see instead and on what configuration? Will Greg Vanney stick with his favoured 3-5-2 or switch to the 4-4-2 diamond? Either are possible depending on how things have gone in training; for the former I’d guess that Drew Moor, Eriq Zavaleta, and Nick Hagglund would hold the centre with Justin Morrow and Hasler on the wings – after that the only toss up is between Marky Delgado and Jonathan Osorio.  If he goes with the diamond then the question is, who sits – Zavaleta or Hagglund?

It’s difficult to peg which formation will work best against the Rapids. They’re nothing like the team they were last year having not only changed coaches (the entire coaching staff actually), but also have a number of new players, having cleaned house after last year’s rather disastrous showing.  It seems likely that they’ll be without Shkëlzen Gashi as he’s dealing with an injury so that’s good news, but they’ve got Dominique Badji up top and Tim Howard and Axel Sjoberg at the back as players that TFC need to be wary of. The other factor for tonight’s game is the weather – forget the altitude it’s the -10 or lower temperatures that are the concern; forget the orange ball it’s about the frozen pitch and well playing in the frigid weather. You thought it was cold in Toronto!

The weather and the rust that usually accompanies the first game of the season will be the deciding factors tonight in this welcome return to CCL play for Toronto FC – honestly aside from the having to play MLS teams, CCL games are some of the most fun you can have as a fan, plus there’s all of the delightful Concacafing to pull your hair out over. I’m expecting a frozen 1-1 this evening with an all bets off return leg at BMO Field next week. Welcome back CCL, we’ve missed you.