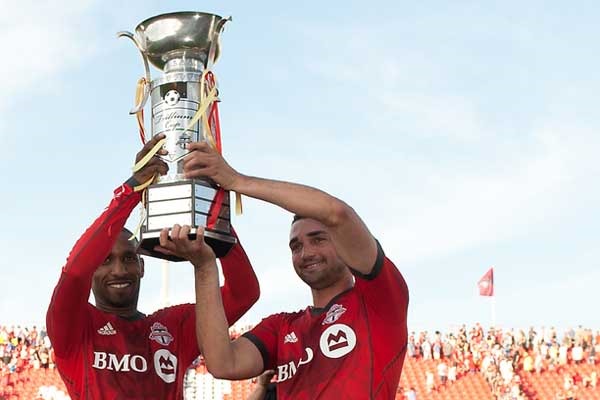 Didn’t we just play these guys?  Can we not have a different team be designated rivals and thus be one of the teams we play three times every bloody year? Ah well, it is what it is and thus on Sunday we’ll play again, the 3rd time this year, second time in July and there’s still everything to play for, the Trillium Cup, the second leg of the still possible quad is of course up for grabs here if TFC can get the win. The list of players raising the trophy in a bemused fashion contains such international luminaries as Frings, Johnson, Soolsma, Defoe, Gilberto. With Damien Perquis now departed without ever having won it, surely the rallying cry will be ‘win it for Benny Balls’ as this will likely be Cheyrou’s last chance to get this incredible honour to impress his amis back in France.

More importantly of course it will be 3 points to help TFC get a little further ahead in the mid table morass that is the Eastern conference race for the playoffs. Perhaps more importantly still, it could be a chance to further hurt Columbus’ chances of recovering their season and making the playoffs. Despite their struggles so far, I still think of them as one of the better, more dangerous, teams in the conference that I wouldn’t want to come up against in a one off playoff game so that would be a very good thing.

The upside to playing a team again so soon would generally be that the previous match would serve as a handy guide to what we might expect. That game in Columbus ended 1-1, Jay Chapman and Jordan Hamilton combining nicely for the goal. Of course that game probably won’t be all that relevant as that was when Sebastian Giovinco was off with his Adductor injury and TFC really are a very different team when he’s in the team. Crew midfielder Mohammed Saied basically came out and sais that if you stop Giovinco you stop TFC which certainly has an element of truth to it. He did of course finally start scoring again with his hat trick last week and he looked noticeably readier to share and play with others, something that led to him getting a chance in close that he converted for his 3rd goal and hopefully something to be repeated. Also hopefully the trip out to San Jose for his 30 minutes of all star game action won’t be a factor.

The other new thing that wasn’t part of that last game is the extra attacking options suddenly at Greg Vanney’s disposal, with Tosaint Ricketts and Jozy Altidore probably hoping to transition from sub to starter at some point in the upcoming 3 games in 6 days spell. I’d imagine the long term plan would be for Altidore to get back in the team alongside Giovinco, with Ricketts and Jordan Hamilton as potential impact subs, either replacing Altidore late to take advantage of tired defenders, or maybe being thrown on as well as Altidore and Seba if TFC are chasing the game. Vanney apparently is saying that it’s still Hamilton’s position right now and Altidore’s going to have to earn his way back into the first team, but I don’t really buy that for a second, there’ll maybe be a couple more sub appearances but as soon as he’s fully fit Altidore’ll be right back there.

It might be a bit soon for Altidore to be considered fully match fit so I’d expect Hamilton to start in this game, and maybe one more over the next week and then that’ll be it, thanks for the goals and back to the bench for you. More than likely though we’ll see one if not both of Altidore and Ricketts coming off the bench again here, which is a very nice option to have, they both looked good against DC. They were also both more or less what you’d expect, Altidore getting involved, holding the ball up and making space for others, Ricketts looking very fast and very ready to shoot, but neither of them looking particularly good at the whole scoring goals part of the game, though as we all know that’s overrated.

The other bit of selection intrigue concerns Jonathan Osorio, presumably now over his flu, does he get back into the team, and if so, whose spot does he take? Jay Chapman had a decent game on Saturday and has definitely grown into his starting role, looking more confident, less tentative, like he knows he belongs, it’d be a shame for him to get moved to the bench again now.

The defence I’d suggest picks itself, Zavaleta’s looked alright next to Moor so there’s no need to make changes there, maybe Josh Williams gets a start in one of the upcoming games, maybe Mark Bloom does as well, but I wouldn’t expect that in this game.

Beyond the on the pitch stuff, the other thing to look out for is the weather as there’s apparently a chance of rain or thunderstorms tomorrow evening, and if you’re in the south stand you know the canopy’s thoroughly useless for that sort of thing, so might be best to prepare to get wet.

Anyway, Columbus aren’t as bad as their record suggests and Ola Kamara is seemingly a bit of a goal machine right now so this should be a close one, I’ll predict 2-1 to the good guys, Giovinco with another free kick (He’ll probably have two that hit the wall, but this one will get over the wall, just inside the post) and Ricketts with the late winner causing unconstrainable glee from Kristin and another fun fake trophy celebration.