Toronto FC vs Columbus Crew: The “Battle” for the Trillium Cup Begins! 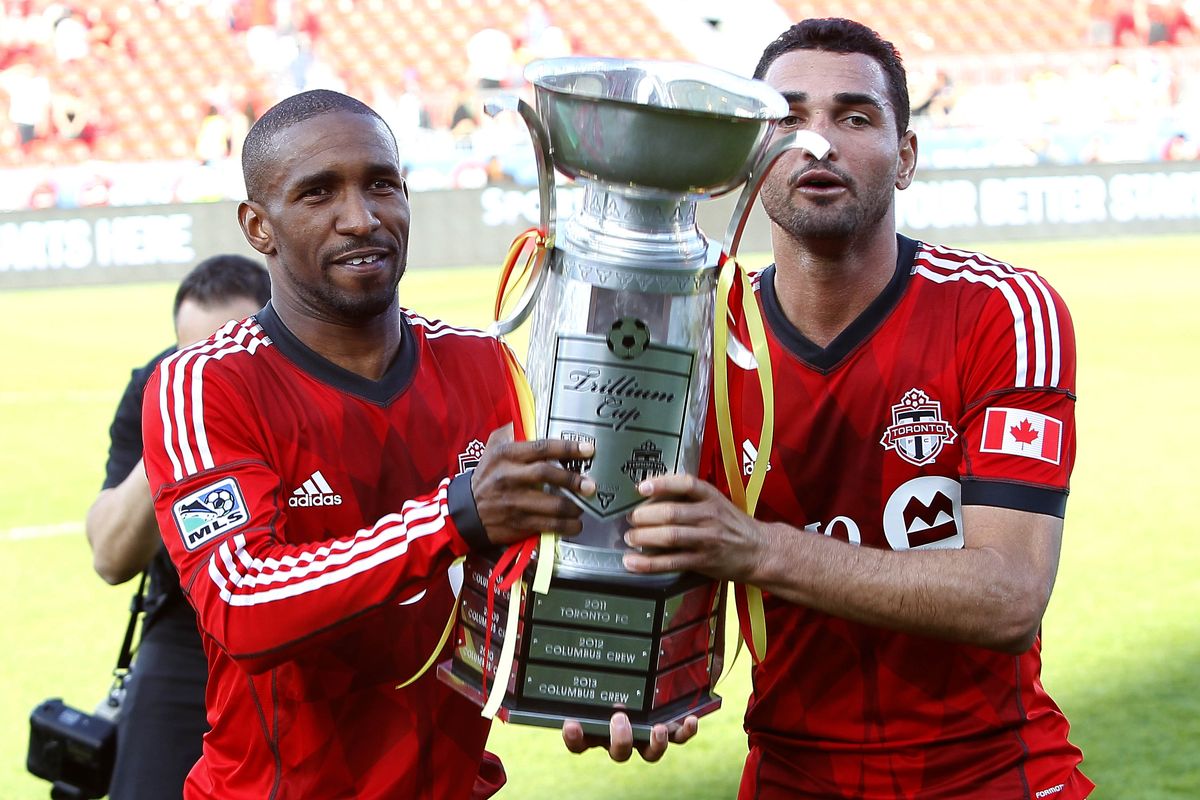 The quest for the most sought after piece of hardware in the East begins when Toronto FC head to Columbus (via Randy Savage International Airport) to attempt to take the first leg in the epic battle for the Trillium Cup.  Yes it’s not just an away game, it’s the beginning of TFC’s first kick at some silverware this season.   Ooh shiny!  Something for the Wall of Honour, yes?

Really it IS just an away game to Columbus to take on the Crew and their awesome kits (they really are very good this year), Kamara lite, Higuain, ex-Red Josh Williams, and the newest member of the yellow football team, Kekura Manneh.   It’s an away game that Toronto want – and need – to put forth a strong performance to build upon not just their undefeated status, but the signs of improvement (at least from an attacking standpoint) in last weekend’s game.

Things rarely run smoothly in TFC land however, and the most frightening of all monkey wrenches was thrown on Friday morning when it was announced that defensive stalwart Drew Moor would not be travelling to Columbus due to a recently discovered health issue.  This is terrible news on all counts; first and foremost for Moor himself – you never want a player, any player, to have medical issues and we all hope that this is nothing and will be sorted soon; secondly of course is Moor’s contribution to Toronto’s defence.  Moor’s arrival from Colorado before last season is one of the primary reasons for TFC’s success last year – you truly can’t understate his contributions, and how having someone of his calibre on the backline has changed their defensive capabilities.  So from a team perspective, this is one of the worst things to happen – especially to a team like TFC that has suffered through years of backline woes.

In the immediacy, the big question is what does Vanney do?  This is likely the game in which he has to abandon the 3-5-2 (or 5-3-2 if you’re Bill Manning), and go back to four defenders and perhaps bring back the diamond midfield.   So go with Alex Bono, Justin Morrow, Nick Hagglund, Eriq Zavaleta, Steven Beitashour, Michael Bradley, Jonathan Osorio, Armando Cooper, Victor Vazquez, Jozy Altidore and Sebastian Giovinco – with Tosaint Ricketts, Jay Chapman and Raheem Edwards as the most likely subs.

I think that this is realistically the best way for Vanney to go; last weekend showed what happens when Toronto have (MLS) inexperienced defenders at the back against fast attacking teams.  Mavinga has potential and this isn’t writing him off, but this is not the game to put him back in the XI.  The Crew will open up an inexperienced (sorry Nick & Eriq but you’re still learning) back three like they’re wet tissue; having Morrow & Beita stay at home a bit more with Hagglund and Zavs in the centre will give them a better chance at holding off the likes of Kamara, Meram, Trapp and Manneh.

Columbus have been solid so far this season at both ends of the pitch; they’ve had a good attack while maintaining a decent defensive rate.  They’ve only lost one of their last seven games (five wins and a draw), they score early and then ride out the game.  For TFC it’s that score early part that could be the worry, Toronto has been slow starting for much of the season so far – both defensively and attacking wise.  So they will need to be alert right off the bat and not let Columbus’ speed throw them off.  As for Toronto’s attack – we saw some nice things with Vazquez, Jozy & Seba last weekend, I’m looking forward to seeing if having Vazquez (assuming the diamond), right behind the forwards allows them to create more, especially with Oso and Cooper on the wing.

I’ve got anxiety for this game though, the first away game after a ho-hum homestand, missing one of their best players and still looking like they’ve not quite gelled.  If TFC can offset being without Drew Moor (and the backline can quickly adjust to his absence), and the attack can find their mojo then this could be a really fun game.  But even though I’ve been fairly optimistic this season so far, I’m sticking with my negative prediction from the podcast of a 2-1 loss for Toronto – but I’ll happily be proven wrong and see TFC continue the unbeaten streak – prove me wrong boys, prove me wrong.