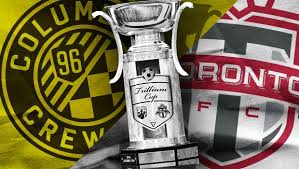 Still the only silverware TFC will see this year.

It’s Trillium Cup time baby!  What’s that?  You forgot about the Trillium Cup?  That’s OK, so did everyone else. However if Columbus win today (7:30 pm ET, Mapfre Stadium, SN360), then they get to again hoist the TCup and lord it over TFC yet again.  And for that they will continue to be our most hated rivals for all eternity! Grrr.

Toronto FC are coming off a workmanlike win against the Union last weekend that saw the Sebastian Giovinco/Marky Delgado tandem at work once again with two very nice goals. The duo are hopefully forming a solid partnership that will give TFC more scoring options and be better able to confound opposition defences.  That’s still one of Toronto’s weaknesses; they don’t have a lot of secondary scoring options – Delgado could be stepping up to fill that role.

We also saw Ashtone Morgan with another very solid performance upon his return from the Gold Cup.  He and Jonathan Osorio are both back with the team (Michael Bradley will not return until next week) as is Jozy Altidore.  When Bradley returns it will be interesting to see where Marky Delgado gets moved; but that’s a worry for next week. Benoit Cheyrou had a rare subpar performance with some uncharacteristic giveaways and we also saw the return Joe ‘Joebergine’ Bendik as keeper.  Unless Joe gets injured again expect that to be the norm going forward – we’ll miss you Caveman!

The Crew are a team that will not be easy to beat.  They’re second in the Eastern Conference, have a great home record, have scored the second highest number of goals in MLS, have the leading scorer (Kamara) and assist leader (Finlay)…aren’t you excited?  They also easily handled TFC way back in March – yes that’s before the team had gelled at all but really, we’ve only won three times in Columbus (and only beat them 5 times in total) – this is a fixture that has long haunted Toronto.

1. Kei Kamara: DO NOT LET HIM OUT OF YOUR SIGHT! Seriously, he loves to score against Toronto.  Do you want to give him another chance for a cheeky goal celebration? He’s scored 14 of the Crew’s 31 goals; 14.  MARK THE HELL OUT OF HIM!

2. Mark Bloom is out for the season.  Poor Mark Bloom.

3. Ashtone Morgan is questionable and is likely to not play.  But friendlies don’t do any harm.

4. Sebastian Giovinco is knocked up but hopeful for today’s match.  But friendlies don’t do any harm.

6. Ethan Finlay (sorry, he still can’t play for Canada), is on a tear.  Marking him is almost as important as Kamara

7. Don’t forget about Frederico Higuain.  Oh yeah, you almost forgot about him didn’t you?  This team is scary!

8. Luke Moore is out for another few weeks.

9. Nick Hagglund is still out recovering from surgery.

10. Tony Tchani will likely come on and get a card of some sort, but before that he’ll score one of his rare goals.  Just for shiggles.

This game has the potential to be a goal fest; Columbus aren’t that solid defensively so yay us, but they score a ton of goals so, booo.  Either way this is a real test for Toronto and a very important game in terms of table placement.  The Eastern Conference has a silly number of teams that are occupying the mushy middle with only a couple points separating them.  In fact TFC are level on points with next week’s opponent the Revolution – no pressure guys.  And no, we are not talking about games in hand.  Remember what happened last year?  Yeah, so we’re not talking about that.   I admit I’m expecting a loss today, I’m just not sure that Toronto can match up to the Crew right now – hopefully I’m wrong.  Prediction: 2-1 for the Crew.