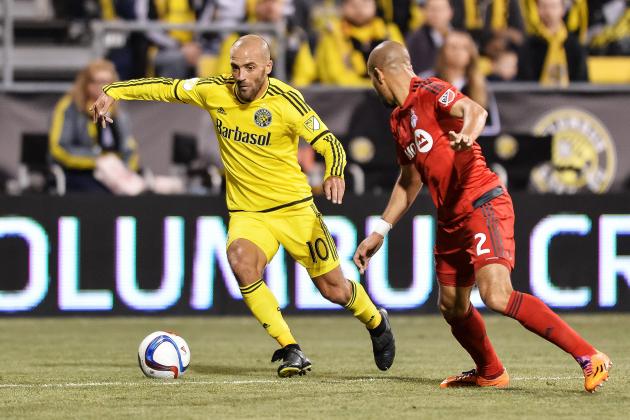 We’re number one!  We’re number one!  Yes that’s right guys and gals, Toronto FC are currently the top team in MLS and are off to their best start in club history – wheeee!!!  OK, everyone have that out of their system?  While I am thrilled with TFC’s recent form (and I am), you have to recognise that it’s still early and that Toronto have a crazy month of May with MLS and Voyageurs Cup games both crowding the schedule.  This week is another two game week, with Columbus up tonight and Minnesota on Saturday – hey, at least the travel situation isn’t quite as arduous this time.

This game against the Crew means the Trillium Cup is on the line!  Yes I know that most of us view the TCup as a faux cup and not something to get that excited about (waves hand), but the one thing that sticks in regards to this is those early years when Columbus always seemed to have TFC’s number – so there’s a certain level of residual ire involved in these match-ups.  If Toronto want to hoist the TCup this year they’ll need at least a draw tonight; if they lose it goes back to yellow football team.

Toronto showed in their surprising win over Seattle that they can sit back and absorb pressure; that they can play careful, cautious football and take advantage of a bit of possession to make the best of their attacking chances.  Really the best anything teams should hope for on the road is a point, wins are a nice bonus, but any kind of positive result is a good thing.  So tonight’s game is rife for a battle and a result for TFC, they’re in good form and riding a wave of confidence.  Bonus for them is Vanney’s gamble on squad rotation over the weekend paid off and they’ve lots of fresh legs for this game – also the only players that are still missing are Drew Moor (hopefully back this weekend), and Ashtone Morgan who’s yet to work his way back to match fitness.  As tonight’s game is the one that means most in terms of conference standings I expect that Vanney will put out a strong lineup.

The Crew are also having a strong start to their season and like many of the top teams (Toronto FC included), have a strong home record with only one loss to four wins and a draw, including last weekend’s win over the Rev.  The Crew are also playing two games this week and will head up to take on the cheesemakers on the weekend – but again, of the two games they play this has to be the one that is the focus.  With Ola Kamara scoring, and Frederico Higuain looking like the Pipa of old, Toronto will need to be wary of their midfield game, and especially their set pieces.

As I said, I expect a strong lineup from Vanney tonight – look to see Seba back in the lineup as well as Victor Vazquez to help work his magic around Higuain.  Whether or not we see Marky Delgado or Jay Chapman tonight is more the question – both have done well of late and given the schedule this month they’ll both get to see time.  I’d also expect to see Steven Beitashour back and quite likely Eriq Zavaleta, this game more so than the weekend match against the Loons, has the potential for a sharp attack and therefore goals.   But I was impressed by both Jason Hernandez and Chris Mavinga on the weekend so who knows, this depth thing is weird.  Having said all that I think I predicted 1-1 on the podcast, so I’ll stick with that.