Home » Match Previews & Reports » Toronto FC vs DC United: Will DCU Get Revenge or Will TFC Continue To Dominate?

Toronto FC vs DC United: Will DCU Get Revenge or Will TFC Continue To Dominate? 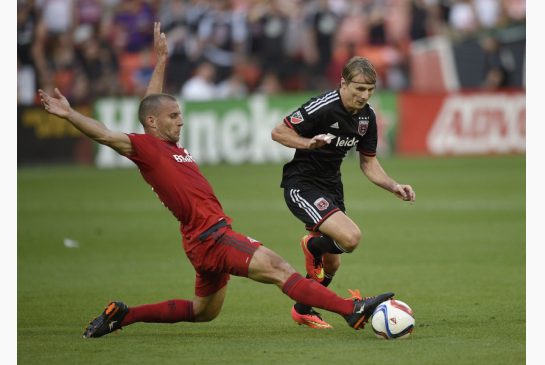 Wednesday night was fun, wasn’t it? No I mean that, it WAS fun!  Well played, some nice goals, they beat a team that was nipping at their heels and bounced back decisively after the difficult game against NYCFC – Fun!   Today’s match against one of the best in DC United is a little more daunting; they’re currently the best team in the league and are more than likely looking for a little revenge after the loss at home to TFC a few weeks back.  Did I mention that it’s going to rain?  Sounds like just a regular day at BMO…

The good news is that for the most part the team is intact; all they’re missing is Benoit Cheyrou who is still nursing a calf injury as Ashtone Morgan (who missed Wednesday’s game) has recovered from his illness and is available to play.  This may be more important than having Cheyrou back as Toronto will need it’s best defensive line to deal with the likes of Chris Rolfe and Fabian Espindola.  And as we’ve seen time and again Warren Creavalle just isn’t equipped to deal with threats of a high calibre attack when he’s called upon to play at the back.   This should be a very even match-up actually with neither team missing that many players and those that are seem to cancel the other out.

DCU are a very good team – they’ve balance throughout their lineup and possess one of the best keepers in the league in Bill Hamid.  As we’ve previously mentioned Chris ‘The Muppet’ Rolfe has found his stride this season and leads the team in most offensive categories – much in the way that Giovinco does here, although with slightly less dominance.   Espindola is back and playing very well and Luis Silva (remember him?) has recovered from injury and made his second start of the season in DCU’s win over the Fire on Wednesday as Ben Olsen rotated his squad.  It’s one of the reasons that they’re in first; they’ve a well put together team that are pretty much hitting on all cylinders right now.

What of TFC’s three DPs (I automatically finish that with ‘and one DJ’ every time) and their dominating performance on Wednesday?  Well I say more of that please.  This is what we’ve wanted to watch game in, game out.  Wednesday’s game was a good example of what we hoped this team could/would be this season.  Michael Bradley and Jozy Altidore have been up and down this season but when in form have produced some very nice things for the team.  And of course Seba is Seba – one of the best we’ve seen in TFC red and some weeks reason enough to come watch the team.

3. Fabian Espindola: setting up his teammates with alarming regularity – keep the ball away from him

4. Ashtone Morgan: playing some of the best soccer of his career this year – watch him, it’s fun

5. Marky Delgado: Was Wednesday night’s excellent performance a fluke? Watch today and see as he fills in at holding winger for Collen Warner (filling in for Cheyrou)

6. Bill Hamid: He’s really good.  But I’m hoping he has an off game.  TFC attack will need to be precise today

7. Seba doing Seba things: Giovinco ran riot over DC in the last game – will he be able to today or will Olsen’s team take a page from the NYCFC playbook?

9. TFC II play after the Toronto FC game – your tickets gets you entry if you’re of a mind to stay.

10. Unfortunately for TFC II, the Canadian Women’s national team plays at 7:30 – most of the crowd that aren’t going straight home are going straight to the pub to watch.

I like games against DC United; they’re usually well played – though oft frustrating affairs like many of TFC’s past games against just about anybody – entertaining games.  DC haven’t done that well on the road this season (comparatively) and haven’t scored that many goals in those games.  TFC are on a high from Wednesday night and should be carrying that momentum into today’s match.  Also, the departing Gold Cup players (Bradley, Altidore, Morgan and Jonathan Osorio) will want to not only put on a good performance to keep themselves motivated but also leave the team on a high note.  I predicted a 2-2 draw during the podcast earlier this week so I won’t change it (although secretly I’m going with 2-1 TFC, shhh don’t tell).