Posted By Kristin Knowles on May 7, 2016 in Match Previews & Reports, Uncategorized | 5 comments 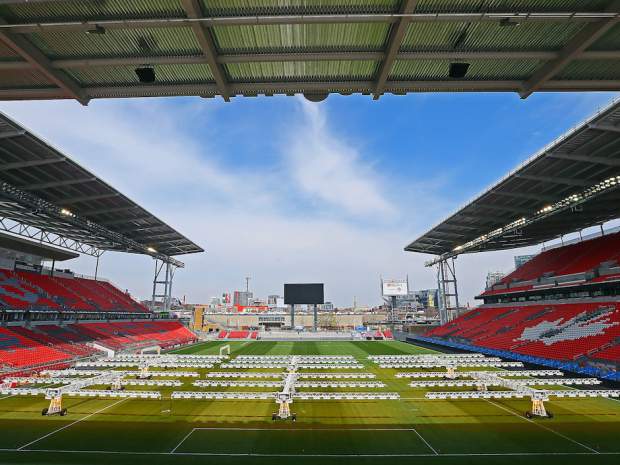 Looks fancy; will it be worth it?

This is it, the moment that everyone’s been waiting for, our 2016 home opener.  It’s been a very long time coming hasn’t it? I don’t just mean the past two months, I’m talking about the past two years; two years of crazy schedules, two years of bigger and better DPs, of more new coaches and so on…yes the usual TFC stuff but this time, well this time (like pretty much every time), it’s supposed to be different.  We’ve got a new stadium, a new guy in charge and a new attitude!

So then that’s the question: Will two years of protracted road trips, uneven play, and a stop for a cup of coffee in the playoffs be erased by a shiny new BMO Field and a grand ‘re-opening’ and a team that’s finally showing they can be tough defensively?  Well, this is what we’re about to find out.  Toronto FC play their next four games at home – up against some tough opposition – and have a lot to prove.  TFC are in their 10th season and they’ve lived a roller coaster existence in that time; eroding fan faith, getting pushed out of the media limelight and losing the lustre of being the team that saved MLS.  This season is supposed to be the one that really and truly changes all of that, the one that turns the clock back to the days when fans filled the stands, cheering and singing, making the stadium vibrate with their enthusiasm.  This is my tenth home opener.  I remember those first years when it was bedlam and sheer enthusiasm and the results were almost secondary because it was fun!  Hell, I remember my parents asking me if the stadium really was shaking because they weren’t sure if it was shoddy camera work or enthusiastic fans.  Fun!  (No really, it was).

So will anything less than a win do today?  If the new canopies don’t protect (some) of the fans and actually make it louder will it have been worth it?  Honestly, it can’t all be judged on today, as much as some may want to.  If they get blown out then yes, there will be anger and dismay.  If the canopies seem to be mostly cosmetic then yes, there will be pushback.  If the circus still feels like its overtaking the game then yes, people will complain (as they have the right to) about the game day experience.  I’ve not even mentioned the ‘wanding’ by security – I checked into this and was disappointed to learn that we wouldn’t be getting actual wands a la Harry Potter (MLSE, there’s your next giveaway idea!  Talk about family friendly fun!).  Hopefully the extra security stuff doesn’t go overboard and take away from the game day experience.  Honestly there’s just so much that can affect tonight’s game (did I mention the midges are back? *shudder*), that it will be hard for it to live up to expectations.  Will I pass summary judgement after one game?  No.  But that canopy…oh please don’t let it be completely useless, please.  Anyway, on to the game.

Of course the home opener is against one of those teams that have Toronto’s number, FC Dallas.  TFC have only beat them once in MLS (oh but the CCL was so delightful), Dallas won their only meeting last year and haven’t been to BMO since 2013.  And even though they’ve been completely blown out their last two games (3-0 to Vancouver & 4-0 to NYRB), they’re still tied for first place in the Western Conference.  Whee!

Dallas boast some of the league’s most lethal weapons in Mauro Diaz and Fabian Castillo; you remember Castillo from last year right? He of the lightning pace and many goals? Yeah, that Castillo.  Not to mention Canadian Tesho Akindele and of course, ex-Red, the 37 minute man himself, Maxi Urutti.  Urutti’s been a huge part of FCD’s attack this season and is almost certain to score/set up a goal today. However, if TFC can continue on with their defensive ways then they have a chance to come away with all three points today, because while Dallas can score they are porous on the road.  Thirteen of the seventeen goals they’ve allowed this season have come on the road.  Honestly if the midfield can break up their passing game and Justin Morrow and Steven Beitashour can handle the speedy attack down the wings?  Good things could happen.

Toronto are almost entirely healthy with Jonathan Osorio available to play today.  That’s good news for Greg Vanney because I think they really missed him last week, especially in helping set up the attack.  Tsubasa Endoh had a lot to do in his first game back so I’d expect to see Oso start again.  But otherwise that’s the only change I can see coming – the rest of the usual starting XI have been solid – why mess with a good thing?  Really the big question for Vanney & Co. today is do they change up the style of play and go for a more attacking style now that they’re at home?  We’ve been told that the goals will come, that things will be different at home.  Do they have to change things?  Not necessarily – they’ve had some pretty good results playing cautious this year – but the lack of scoring will (already is) become a concern at some point, especially if others don’t start to score.  I’ll take cautious and winning over flashy and high scoring (but losing) any day of the week.

As cynical as I often am, I am quite excited for tonight.  I love home openers, first kicks and all that stuff.  I get to see my extended footy family all in one place, see my team in front of me (well at home anyway), for the first time in over six months, see the new stadium – that’s more curiosity than excitement but still – and just well, it’s the home opener!  I admit to being just plain excited, at least for now – I’m sure that the cynicism will return.  However right now I’m counting down the hours until I see everyone, get to BMO and cheer on our Reds.  Prediction: 2-1 TFC.