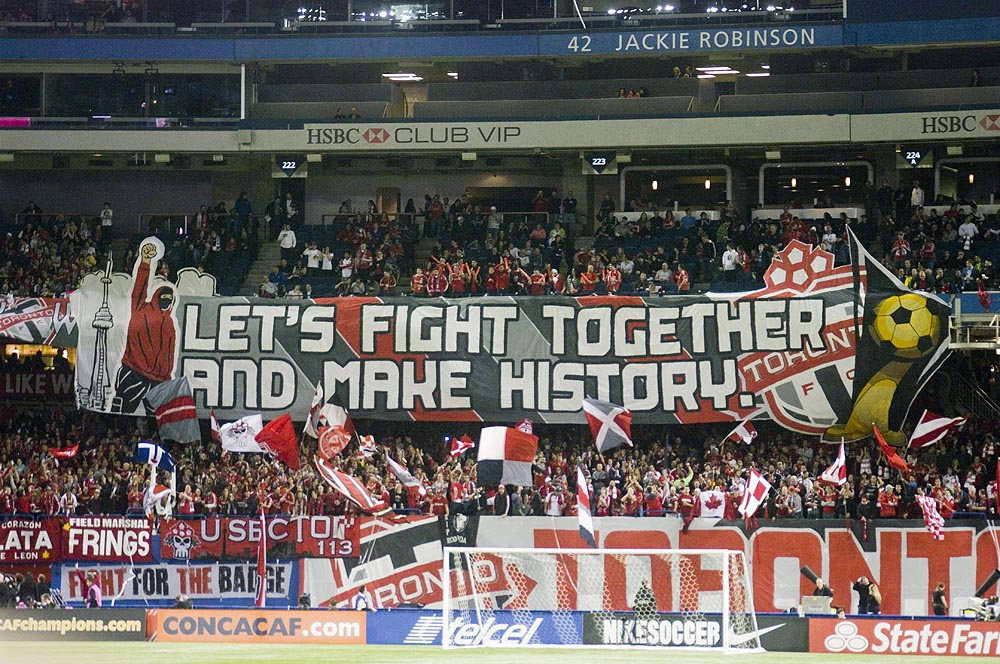 Terrible venue, but damn that was a fun night. More of this please. League success would be fun.

That really was three games in eight days wasn’t it?  A bit of a whirlwind that saw our Reds come away with only four points out of a possible nine; not exactly the expected result but oddly enough, not terrible either.  The NYCFC game was a frustrating result (really they should have adjusted better and got at least a point), the Impact match was one of the most fun and well played games by TFC in well, a very long time and the DCU game?  Well, what you could see through the sideways rain and monsoon like conditions wasn’t pretty, but Toronto managed to put in a solid performance and hold the league leaders to a 0-0 result.  So not great, but not horrific either.  Umm yay for muddling through?  I know, I know, I shouldn’t set such a high bar for them.

Time to put June behind us and look to July; surely this will be a glorious month for TFC!  Let’s see what we’ve got coming up shall we?  Due to a variety of reasons we go from feast to famine for home games over the next month as Toronto have just the one game at BMO (July 18 vs the Union) over the course of July – long road trip, check!  Due to Gold Cup call ups TFC will be missing four regular starters as Michael Bradley, Jozy Altidore, Ashtone Morgan and Jonathan Osorio are off playing with their national teams – depth being tested in a big way, check!  Their first opponent is of course the (Steven Gerrard free) LA Galaxy, a team that they haven’t beat since 2008 in league play and the reigning league champs – seemingly unbeatable opposition, check!  Oh boy.

The hits keep on coming for Toronto FC leading into tomorrow night’s game (StubHub Center, 10:30pm ET, SN360) against the Galaxy in their only meeting this season.   Already missing a huge part of the lineup with the Gold Cup, still missing Steven Caldwell, Mark Bloom and Clement Simonin to injury – who’s willing to bet we see Simonin before the other two? – and then this afternoon we got the sad news that Luke Moore has had a death in the family and of course will be missing the game.  While Moore hasn’t exactly been a super-sub (or starter), he’s had a few decent moments and has a goal and three assists on the season – that’s three more assists and the same number of goals as the man who’ll be replacing him (Robbie Findley), which is of course a replacement for Jozy Altidore.

Now having Findley play up top as opposed to on the wing – where he’s supposed to be much more comfortable – will be interesting to watch over the next few games as other than Sebastian Giovinco TFC have yet to find a reliable second goal scorer.  This presents a huge chance not only for Robbie Findley, but also for some of the younger players on Toronto FC.  Jordan Hamilton has travelled with the team as has Jay Chapman.  Chapman has seen minutes of late but it’s been awhile since we saw Hamilton step on the pitch for the first team.  While it’s very unlikely that Hamilton will start in any of the upcoming games, there’s a pretty good chance that Chapman may see his name on the starting 11 as someone has to play out wide and the lineup could very well look like this:

Happily Benoit Cheyrou is returning to the lineup and yes, it’s entirely possible that he and Warner could swap positions in the midfield diamond but as Cheyrou has been an offensive force as well as a defensive stalwart he steps more naturally into the attacking position (a la Bradley) then Warner does in my opinion.  If you look at the team’s stats it is all Giovinco and Cheyrou for the majority – add in the fantastic performance by Warner (as well as Perquis) at the back last week and this is the most logical option.

LA aren’t without their own issues. They’re missing both Omar Gonzalez and Gyasi Zardes who away with the US team for the Gold Cup, Jaime Pinedo is with Panama for the same reason and (ex-Red), late goal scoring, TFC killing striker Alan Gordon (I’d still take him back) is out suspended due to yellow card accumulation.   So those are the positives and going into the StubHub Center against a seasoned team and coach in Bruce Arena I’ll take all the positives I can get.  I did mention the not having won there since 2008 right? Well in league play anyway; we all know what happened in 2012…

Still, this is no walk in the park and for a lineup that is certainly not used to playing together – plus Morrow back on the left – the first part of the game could be nervous for TFC fans.  Toronto often take time to settle into a game and this is not a team that you want to be finding your way against.   Even with the absences they’re still a very deep team and boast a solid attack – hello Robbie Keane scorer of two goals against TFC last year – and Jose Villareal, or Edson Buddle or well, any number of Galaxy players.  Brian Rowe is solid at the back and while missing ex-Red Todd Dunivant to injury, Dan Gargan is sure to find a way to frustrate his former team alongside AJ Delagarza.

The other concern is that LA have had a bit of an up and down season.  Their long-standing unbeaten home record came to an end recently when they lost to the Whitecaps last month; then one week they’re trouncing the Union and the Timbers and then turn around and lose to the San Jose Earthquakes twice in one week.  They’re still in the mix in the Western Conference, currently holding down the fourth spot, but by no means have they been the dominant force that we’ve often seen.  However this is the Galaxy; perennial MLS Cup contenders (winning three of the last five), they’ve moved on nicely post Golden Balls and Landycakes with Keane and Co. looking to welcome Steven Gerrard (and potentially Gio dos Santos if the new Core Player rule goes through) to the team they could once again easily challenge for the trophy.  Who’s excited?

This game (and this month) will be a true test not just of Greg Vanney’s coaching skills, but also of the team.  How quickly can they gel with new teammates, how will the younger players – who are getting one hell of an opportunity – fare playing with the first team and will someone other than Seba step up and score some goals?  Hold on to your seats kids, this could get bumpy.  Prediction: 2-1 to the Galaxy.