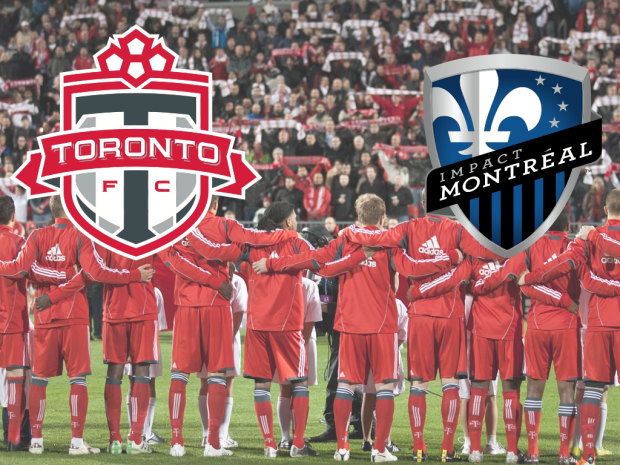 Decision Day, Derby Day, last match of the season – whatever you want to call it we’re heading into the last match of the season with a lot to play for and against pretty much the perfect opponent. We’ve waiting a long time for this, for a season that has the tiniest taste of league success – although a play-in game isn’t really what we’re hoping for – but the potential to do more hasn’t been a consideration around these parts for quite some time.  And there’s still lots to play for today (5pm, Saputo Stadium, TSN 4 & TSN 5), as there is still no guarantee as to where TFC will play their first playoff game – but they have to win or tie to make a home game a possibility.  A loss means that Toronto FC may not see a home playoff game this year.

TFC fans are invading Montreal as up to 500 have travelled for this final game of the regular season against our rivals – this is one of the best things about this fixture, the relative closeness and the built in historical rivalry between our two cities; even if there were nothing to play for today this would still be a well attended match by supporters from both clubs – the fact that playoff positioning is at stake makes it that much more exciting.  But games aren’t won by fans and this will not be an easy game for TFC to come away with a positive result, even though they’ve won against Montreal in both of their previous games this season.

While TFC have close to their first choice lineup they are missing Damien Perquis who has been fairly solid of late and Toronto are always in need of a solid defensive effort, especially on the road.  In this case they’ve the speedy Dominic Oduro and the rampaging Didier Drogba to deal with.  The last time these teams met Oduro was a terror that TFC had all kinds of trouble dealing with and Drogba didn’t play due to injury.  They’re also on the road against an Impact team that has been on a pretty decent run of form, winning five of their last seven games.

Toronto will need strong performances from all three DPs similar to last week’s match against the Red Bulls to see them come home to host a playoff game later on this week (day still to be determined by the TV gods).  Seba had that goal against NY and Michael Bradley and Jozy Altidore have had their moments this year – although I’d be remiss if I didn’t point out how well the team was doing in that game before any of the DPs set foot on the pitch.  If the team plays to that level with the DPs out there then they should be able to come away with the needed points.

1. Drogba is on a scary scoring streak – do not leave him unmarked or give him space.

3. Seba seals the Golden Boot with a goal today.  And likely the MVP too.

4. TFC need to tie at a minimum to have a chance at a home playoff match.

5. A TFC win combined with losses by DCU and the Crew will give TFC a first round bye.

6. Jozy Altidore is available to play.

7. Damien Perquis is still hurt and will not play.

8. Jonathan Osorio is available to play.

9. Did I mention 500 TFC fans will be in attendance?  Awesome

This should be an exciting game.  There’s so much emotion regardless of the rivalry between these two teams, but there’s also former players (Warner, Oduro, Bekker) in the mix, there’s high profile DPs and two clubs that have had their fair share of ‘most disastrous club every’ moments.  But really this game is Toronto FC’s shot to prove that things are different – at least on the pitch.  It’s been nine years; nine years as we’ve watched 100s of players, a bushel of coaches, consultants, club presidents and so on go through the revolving door at Toronto FC and here we are, finally at a place where things just might go well.  I’d love to wholeheartedly embrace this day and say that this will be our moment but those aforementioned nine years weigh heavy.  However I am EXCITED for today’s match and hope (please oh please) that this is our time to at least start on the road to good things.  I don’t expect them to win the cup this year, I never did – but a decent kick at the playoff can will be a good start to what this team is capable of.

Come On You Reds – lets get it done this time.