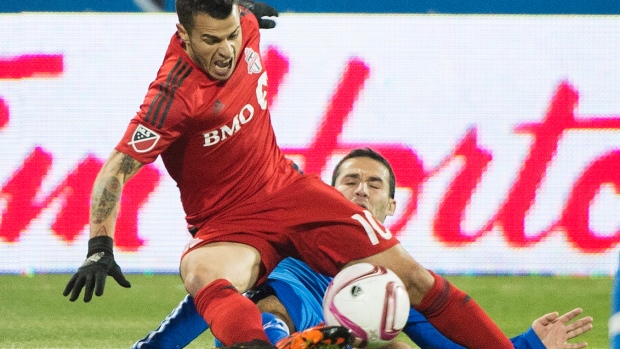 Alright everyone, here we go – TFC are riding high on a seven game unbeaten streak, top of the Eastern Conference and seemingly the entire team hitting on all cylinders. So what better way to head into the international break than to have a home game against their biggest rivals (come on, you know it’s true), the Montreal Impact.  The cheesemakers are having an alright season and currently sit fifth in the East – but they’re also coming off a 3-0 loss to the Chicago Fire, a game that gave the Fire their first victory on the road in over two years, as well as a mid-week draw against DCU – so they’re tired, they’re not playing their best and they’re coming to Toronto. Excellent.

Really it’s all rather exciting – the winning, the goals, the production by Jozy, Seba and Ricketts, the astonishing progression, maturity and play from the younger players – what’s not to like?  Top of the East, second for the Supporters’ Shield race, second best goal differential in the league and today’s game; at home, against the team that ignominiously drummed TFC out of the playoffs last season, in front of a capacity crowd with the raucous CNE as the back-drop – honestly this is the stuff that TV movies are made of!  It’s hard not to be excited about Toronto FC right now, even if there are those lingering, niggling doubts that come from being long time fans; I know it’s not easy to cast those aside, really!  But lets give it a try, at least for today – this game seems like a great one to just pretend like it’s year one and we’re all full of bubbly enthusiasm and everything is shiny and new.

Today’s match is also one at which the players of the 1976 Toronto Metros-Croatia team will be honoured; the team that boasted the great Eusebio and Canadian footy legend Bob Iarusci, the team that shocked everyone by winning the Soccer Bowl that year.  The team hosted the remaining players up at the KIA Training Ground last night but will have a special moment for them today before kick-off.  There is also a surprise coming from TFC’s supporter groups today – if you’ve been envious of other club’s displays or bemoaned the lack thereof from the south stand at BMO, apparently today will help fill that void.

Lineup wise this should be awfully close to the first team – excluding Clint Irwin who will not rejoin the first team until after the international break – available to coach Greg Vanney.  Vanney rested a number of players on Wednesday, or only gave sub minutes in order to have fresh legs available for today’s match. While Tosaint Ricketts had a good match against Orlando expect to see Jozy Altidore get the start alongside Sebastian Giovinco, along with Michael Bradley, Marky Delgado, Jonathan Osorio and likely Will Johnson in the midfield, and then the usual suspects at the back: Steven Beitashour, Drew Moor, Josh Williams for the injured Eriq Zavaleta and Justin Morrow.

This is a game that TFC should win, I’ll be very surprised if they don’t and I feel fairly confident in saying that anything other than a win will be a disappointment to everyone concerned, from the fans on up.  There’s a chance that Toronto could go top of the Supporters’ Shield race if they win and Dallas don’t in Houston (ha!), but really I’m quite content with a drubbing of the cheesy ones and first place in the East.  The entire VMP panel predicted a win for this one, varying from a solid win to an absolute crushing of the Impact.  This should be a fun one – see you there.