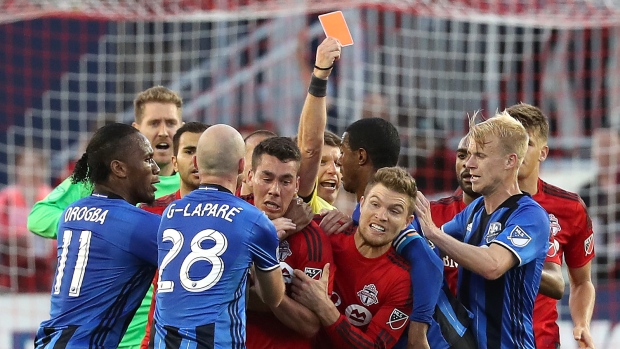 It’s time for another Two Solitudes Derby; and honestly could the timing be any better?  Toronto FC are in danger of a lost MLS season and pretty much every game from here on is must win if they’ve a hope of making the playoffs. And so enter the cheesemakers, TFC’s biggest rival (Rivalry Week, rawr), they’ve crushed Toronto’s playoff dreams before and they’d love to do it again.  To add to the heightened atmosphere this match is all taking place with the Ex going on in the background – the lights, the calls of ‘do you want to go faster?!’, the lines for tiny doughnuts – what more could you ask for?

Well, we ask for three points, not a hard fought draw, definitely not a loss, but three points. TFC have a couple games in hand over Montreal (who are clinging to a playoff spot), and this is a golden opportunity to make up some ground in the Eastern Conference. The Impact beat the hapless Fire on the weekend and we all know how Toronto’s match against San Jose went (SIGH). Montreal have already beat TFC this season (1-0 way back in March), though Toronto hold the edge all time between the two teams.

Toronto are still dealing with some injury issues – Auro is still not back, Vazquez is questionable, it seems as though Mavinga is unlikely and there were rumblings that Oso has a knock. Fun! Add to that the absence of Altidore and those nervous twinges you’re getting? Completely understandable. In the plus side, Drew Moor is healthy and expected to start! Very good news. Also, it appears that Lucas Janson wasn’t seriously injured in the game against the Quakes, also got news.

It’s going to be a scrappy match, expect goals, expect cards (both Gantar AND Geiger on the reffing crew tonight), and at least one VAR controversy. These are usually fun games – for at least one fanbase.  I’m still feeling iffy about the whole thing so I’m sticking with my 2-2 podcast prediction .