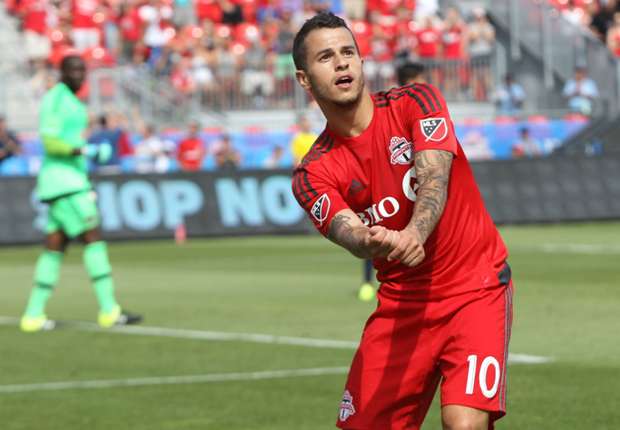 Playoffs.  Toronto FC are in the playoffs.  Seriously.  No really, it’s happening.  When?  Tonight in Montreal (7pm, Stade Saputo, TSN) our Reds will play their first ever playoff game.  It’s exciting and bewildering (how did we get here) and just a little hard to believe.  Even though I know it’s happening, until the game kicks off tonight I won’t quite believe it.  However we are finally – finally! – in the playoffs; whatever your thoughts on the team or the season as a whole take a minute and enjoy that.

TFC’s first playoff game is as though it were scripted by an 80’s movie studio; Two rivals, both teams out for revenge, both teams with something to prove, emotions are high – what will the final showdown bring?  Aaaand cue the montage music, close-up on the ticking clock and SCENES!   All tinged with maple syrup, Canadian flag-waving overtones – TWO Canadian teams playing one another in the playoffs?  All of Don Garber’s dreams are coming true!   Two Solitudes, 401 Derby, Battle of Upper and Lower Canada – however you want to look at it this is almost the perfect scenario for Toronto’s first ever playoff game. It could really only be better if this game were at BMO instead of in Montreal; but beggars can’t be choosers, right?

Our Reds are not only looking to advance further into the playoffs (hopefully playing the Red Bulls in a Conference Semi-Final), but perhaps a more immediate focus is some redemption in the face of their second half collapse against the Impact on Sunday.  There’s a fair bit for Toronto to prove in this game – for many (fan and player alike) this game will be what encapsulates the season for them and determines failure or success.

It is unlikely that we will see any changes to Greg Vanney’s starting XI tonight, even with the defensive issues we saw on Sunday (read: all season) as well as the frustrating inability to finish their chances.  This is still his go to eleven and we can only hope to see a more complete effort from them.

While I am giddy at the thought of them progressing further into the playoffs it is hard to not feel somewhat pessimistic. I want them to win – so very, very much – but given their season and recent form it’s hard to ignore that voice in the back of my head that says ‘not this time, sorry’.  It’s great to see the players on social media all fired up, but I’d rather see that fire on the pitch – except for Jackson, he needs to think happy thoughts.  What we need to see is the team that effectively neutralised the Red Bulls; problem with that is that was a lineup that honestly most of us would not want out there game in, game out. Of course I will continue to ask for Hercules instead of Robbie Findley and I honestly think that Altidore does better as an impact sub but those things will not happen. Either way, the big three need massive games and the defence need to remember to communicate and actually defend for longer than five seconds.

Can TFC overcome the demons of the past tonight?  Montreal has dashed Toronto’s hopes before, playing on the road is always scary question mark for our Reds and being the team we love to hate, the Impact would like nothing more than to beat TFC to advance (and vice versa).  Expect another scrappy affair, expect Drogba to be ‘hurt’ at least once, expect Jackson to do either some epic time wasting or get carded and expect heartbreak but hope for triumph. Guys, it’s really here – good luck concentrating, shout out to those making the trip and here’s hoping we’re not all curled up in the fetal position at 9pm.  Please let us have nice things; please?