Toronto FC vs NE Revolution: Will Foxy Foxborough Be Tough Turf For TFC? 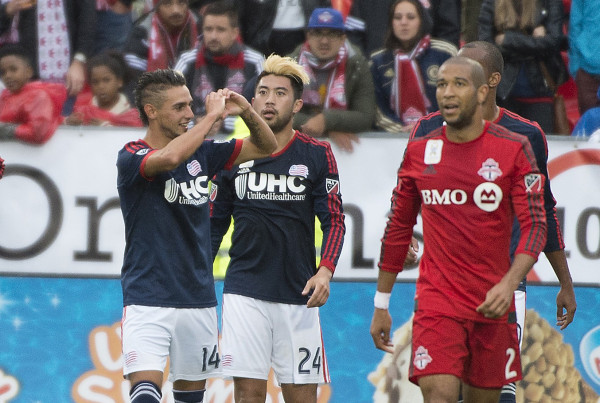 Too many red cards!  Poor refereeing! Lack of flow to the game!  Got that out of your system?  Good.  OK, then it’s time for teams, (and fans) to refocus and try to concentrate on the game at hand, rather than the refereeing. Toronto are coming off of two disappointing losses and will be looking to reverse their fortunes in Foxy Foxborough; the place where TFC strikers/DPs go to die*. (*Editor: Please note no one has died, they just all get severely injured.)  Am I the only one that wants to wrap Seba in cotton balls for this one?

Toronto are of course playing on the demon turf (not all turf is demonic) at Gillette Stadium; a place where TFC have been, shall we say, less than successful.  It’s been six years since they won in Foxborough and the Revolution have won the last three meetings at home (as well as being undefeated against our Reds since 2013).  So who’s excited?!  The Rev have long been one of those frustrating teams for the Reds; they seem to consistently have a strong attack and midfield, bolstered by solid defense.  While not the team of the early 2000’s, they’ve rebounded the past couple years and have been one of the stronger teams in the east.

This year is no different in that regard as they have a strong core carrying forward from previous years, with the only major change being the loss – although that’s debatable depending on your views – of Jermaine Jones to the Rapids.  However Jones was the least of anyone’s problems last season and the remaining Revs are more than enough for any team to handle.  The usual focus is on Diego Fagundez (sorry for the swear!), Lee Nguyen, Juan Aguedelo, Charlie Davies…and so on.  Facing them on any occasion isn’t an easy task – but when you’re handcuffed by history and a long road trip like Toronto?  Well, then it seems all the more difficult.

The good news is that TFC are almost all available for this match.  Yes they’re missing rookie Tsubasa Endoh (didn’t travel due to injury) and Benoit Cheyrou who is serving a suspension from last weekend’s yellow cards.  A couple of new options travelled with the team as well; both Mark Bloom and Jay Chapman are there and could see time on the bench or maybe late minutes depending on how things go. Regardless it’s good to have a mostly full squad for Greg Vanney to pull from.  The biggest upside (we hope) is having a fully fit Jozy Altidore for the first time this season.  In fact expect him to start.  Alongside Altidore I’d expect to see Marky Delgado out there instead of Lovitz and look to see Osorio back out on the pitch.

The two biggest questions for Toronto are Altidore’s health – is he well enough to have an impact on the game?  Can he be that hold up striker, extra play-maker to compliment Seba that TFC sorely need?  Fingers crossed.  And speaking of Seba, he’s had a rough go of it the last couple games.  Yes we get spoiled watching him take over games and score those special goals, and yes not having scored in only two of their four games shouldn’t be cause for panic, and yet…I’d be lying if I wasn’t at least a bit anxious to see him get another sooner rather than later.  Because outside of Seba and Altidore there isn’t anyone on the roster that you look to and say hey, he’ll help fill the scoring gaps!  So regardless of outcome in this game, I’m hopeful to see the two of them at least clicking and looking like a duo that’s going to do some damage this year.

I’m honestly not expecting a positive result in this game – all I want is to see this lineup come together and play well.  And for no one to get injured – it is the evil turf of Gillette Stadium after all.   My prediction is 2-1 Rev, or 1-1; I can’t remember what I said on the podcast.   The Revolution are speedy, they’ve got history and a comfort level with one another and a coach that they’ve had for six years – that’s a tall order to come against.  But as I said, they’re not world beaters right now and are certainly not unbeatable.  This one’s a toss up folks – let me know your thoughts in the comments.