Toronto FC vs New York City FC: Can TFC Overcome Player Absences To Get A Result in NYC? 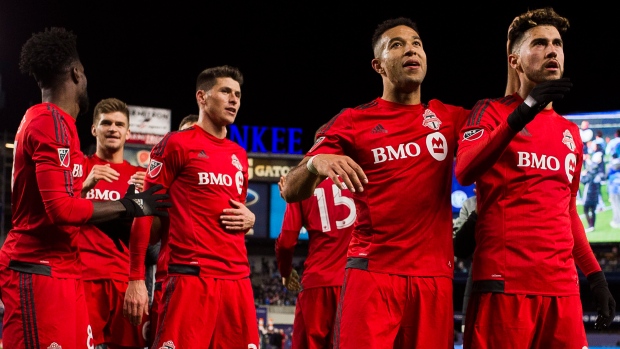 MLS is back!  Many of the players are still missing, but the league swings back into action tonight with seven matches (oh and there’s a couple of those Gold Cup games on too, but who wants to watch that).  Toronto FC gets started with a trip to historic Yankee stadium (the house that Villa built) to take on the pizza rats in their first meeting since TFC obliterated them in last year’s playoffs – ah sweet memories…

Tonight’s match between the two Eastern Conference rivals (currently second and third in the standings), would have been a tough test for Toronto even without the many player absences, as (playoff drubbings notwithstanding), TFC have yet to beat NYCFC in a regular season game.  Heading into the cramped confines of Yankee stadium is often difficult for any team that likes to play a free-flowing passing game; calling for a more defensive minded approach to absorb some of the home team’s attack, but also to find channels to work through on the counter.

The biggest issue facing Toronto FC this evening isn’t their record against NYC, it’s that they’re missing seven players; six are still away on international duty at the Gold Cup (Altidore, Bradley, Cooper, Morrow, Osorio and Ricketts), while Steven Beitashour’s return from injury is still a question mark. So this evening TFC’s much vaunted depth will truly be put to the test.  The good news is that several of Toronto’s top players are available so it’s not as though they’re fielding just the kids.  Victor Vazquez will be key for the attack and expect Benoit Cheyrou to anchor the defensive side of things in front of the defence.  This might be one of the few matches in which Vanney (and his shiny new contract), goes with a 4-4-2 instead of his preferred 3-5-2 – that has proven useful in a couple games so far this season including their match earlier in the season against the Sounders.

Toronto have Raheem Edwards back (he was swapped out for Cyle Larin on the national team), which could mean that Ashtone Morgan is moved back to the bench (sigh), and the Reds also have a new player at their disposable; newly signed Liechtenstein international Nicolas Hasler could be taking the place of the injured Beitashour on the right side of the defence.  Nick Hagglund has also travelled with team as he’s apparently ready (or almost ready) for playing time having participated in full training with the first team this past week.  It will be good to see him back on the pitch for Toronto, though doubtful that he plays tonight.

So TFC aren’t in dire straights on most parts of the field – the biggest potential concern will be the attacking players; yes they have Seba (and his seven goals and four assists against NYC) fully fit and back in form, but they are without his two usual strike partners in Altidore and Ricketts.  So who gets the start alongside Toronto’s leading scorer?  Does Big Ben Spencer get the nod and we see a little and large partnership?  Or does the more experienced Jordan Hamilton take his place up top instead?

Toronto will have to deal with David Villa who leads the pizza rats in scoring (twelve goals so far this season), and has more than once been a thorn in Toronto’s side.  Jack Harrison has also been playing very well of late and has eight goals (and five assists) of his own to complement Villa.   NYC also have Sean Johnson back with the team (having returned from the Gold Cup), and don’t face nearly the same type of player absences that TFC are dealing with – though the pesky Rodney Wallace is still out on international duty so at least one favourable chip falling for the Reds.  Even with NYC’s strong home record, Toronto has shown that they can win in the Big Apple – I’m sticking with my 2-2 podcast prediction.