Posted By Kristin Knowles on May 18, 2016 in Match Previews & Reports, Uncategorized | 1 comment 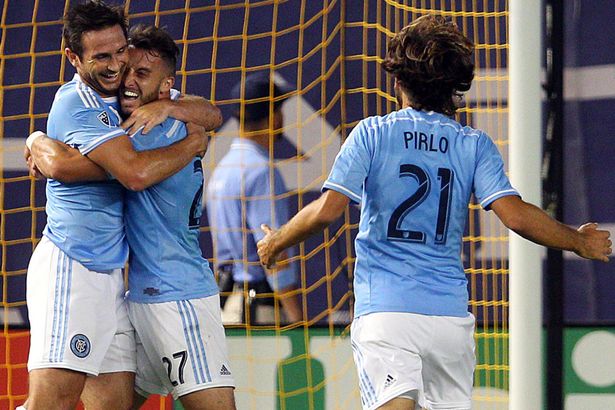 Saturday was fun eh?  Not exactly what anyone had hoped for, or expected of TFC’s second home game.  However, the team will have had little time to dwell on past mistakes with two more games this week against two of their Eastern Conference rivals.  First up is New York City FC who is also in the middle of  a three game week, having just played the Portland Timbers on Sunday night.

Even though NYCFC haven’t been in the league long, they’ve always had TFC’s number winning all but one of their meetings (that one being a goal fest of a draw). Tonight’s match has the potential to be another one of those games, because even though the , City-lite are on short rest and possibly jet lagged they have pretty much everyone healthy.  Everyone being Toronto FC killer David Villa, the most interesting soccer player in the world Andrea Pirlo, the mullet with its own cult Tommy McNamara, and oh yes, Frank Lampard. That’s right, the biggest DP bust since Mista might play tonight – prepare to see a LOT of Chelsea kits at BMO Field folks.

The trio of Villa, Pirlo and McNamara are more than enough to be worried about; as Villa owns almost every statistical category for the team, and oh yeah has SIX goals against TFC already.  Pirlo and McNamara combined on the weekend for a stunning goal and are always dangerous.  This isn’t even including (MLS team of the week) defender Jason Hernandez, or (the awesomely named) Federico Bravo and Frederic Brilliant.  If Patrick Vieira can keep them playing consistent (and high scoring) soccer than they will continue to challenge for the top of the conference.  Oh did I mention their positive road record and GA?  Yeah, this could get ugly.

The other reason that this game could get a bit scary is due to the numerous injuries that are plaguing TFC at the moment.  With Jozy Altidore, Marky Delgado, Jonathan Osorio and Benoit Cheyrou all out injured, as well as the team looking less than solid on Saturday there will be several changes to tonight’s starting XI for Toronto FC.  Expect to see Mo Babouli and Jay Chapman both get starts, and if rumours prove true, Josh Williams in for Damien Perquis at the back.   This is a huge test for both young Canadian players; especially Babouli as he’s been given a fair amount of hype this year.  He’s had some decent moments on the pitch but is having his own scoring issues and expectations will be that he not miss another sitter.  As for Williams, this is a chance for him to earn back the starting spot he had with last year’s defensively challenged squad.

However no expectations will be higher than those on Sebastian Giovinco and Michael Bradley.  Seba has (again) led this team on the score sheet and is currently tied with Villa for the Golden Boot.  As much success as Villa has had against TFC, so has Seba against NYCFC (four goals, two assists) including that hat trick last season.  But NYC has also had some success in containing Seba and without any proven secondary scoring from our Reds there is a lot of pressure on him.  Bradley will also be expected to play a bigger role this evening; on Saturday he sat way back and was basically a third CB for much of the game ceding the midfield to Vancouver – that will not work against Vieira’s team.  Expect a much more active MB this evening as he contends with Pirlo and Co. in the centre of the pitch.

That’s it – a short list this week.  What?  We’ve got two matches, I’ve got two lists to come up with!  I’m hoping for a more conservative match from TFC tonight; a return to the defensive ways that have brought them success so far this season.  Let’s keep the fullbacks at home for more of the game, OK?  Besides that mindset will be necessary to deal with Villa, otherwise he’s just going to run rampant.