Home » Analysis & Opinion » Toronto FC vs Orlando City SC: Is This The Start of TFC’s Climb Out of The Basement?

Toronto FC vs Orlando City SC: Is This The Start of TFC’s Climb Out of The Basement? 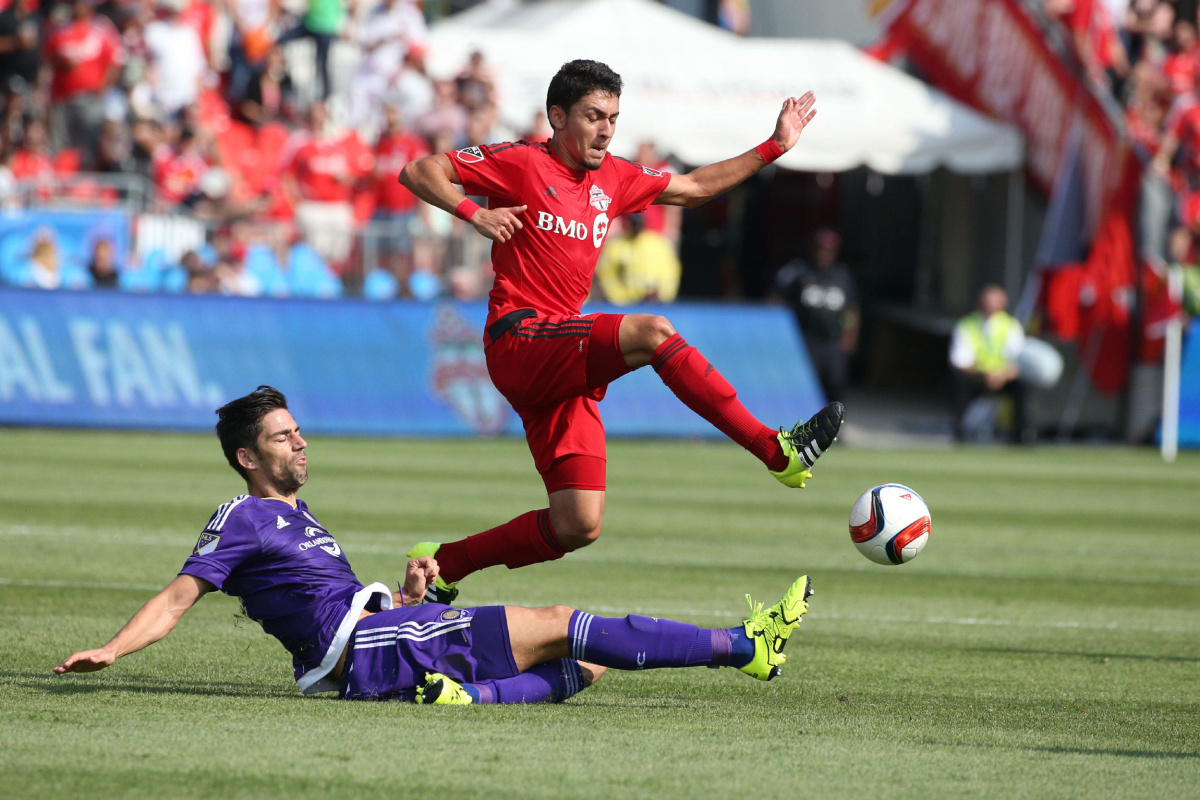 SP-TFC22AUG TORONTO, ON – AUGUST 22 – TFC’s Marky Delgado avoids a slide tackle from Orlando’s David Mateos during the 1st half of MLS action as the Toronto FC take on the Orlando City SC at BMO field on August 22, 2015. Carlos Osorio/Toronto Star

Is it panic time?  If not now then when?  Depending on what happens in the next few games will tell us when (if) that time comes – the season isn’t out of reach yet, but if Toronto can’t put forth some positive results soon, then that panic button will start to look awfully appealing. However, none of that will matter if TFC can put the last two results behind them and play like the team that ran the league last year.  With close to no breaks between now and the end of the season, Toronto have to make every game count if they want to get into the playoffs; in fact they need a PPG close to what they managed in their record setting 2017 season – not an easy task for a team hitting on all cylinders, let alone one beset by injury woes and finishing issues.

Up first on the comeback trail is Orlando, a team that had a six game winning streak going until last weekend when they lost to the AU Guys.  They’ve also tallied two wins on the road – after only winning three all of last season – joyous.  On the up side is that TFC have won the vast majority of the games the two teams have played – the downside is that they’re going to be without Sebastian Giovinco, who’s scored eight goals against Orlando in seven games.  The loss of Seba is even more of an issue given Jozy Altidore’s absence, this leaves Jordan Hamilton and Tosaint Ricketts as Toronto’s strike force for this match.  Both players have talent (yay for CanCon), but rarely start matches, and when they do they’re normally playing with Seba or Jozy.

Toronto are still dealing several other injuries – Drew Moor, Nick Hagglund, Justin Morrow and Nicolas Hasler are all unlikely to feature (yes I know that Moor won’t play) – really all of them are out with only Hasler a dim a possibility.  Maybes/probables for tonight’s match are Chris Mavinga, Victor Vazquez, Gregory van der Wiel and maybe Eriq Zavaleta (though not likely) – whether they start or sub on is the question, but having some kind of regularity on the back line that allows Michael Bradley to move back up to his preferred place in the midfield.  While he’s done yeoman’s work on the backline, the team fares much better when he’s allowed to distribute the ball and break up opposition attacks.  Also the (hopeful) return of Vazquez will give the team more options and fluidity on the attack.

Having Orlando come to town always means talk of Joe Bendik’s time here – the argument about his play in Toronto/how he left/how fans perceive him, will go on – but you can’t dismiss the emotional current for Bendik (and to a lesser extent Will Johnson) when the two teams come together.  It’s just the way it is and Toronto will have to be ready for that.  One of the players TFC won’t have to worry about tonight is Dom Dwyer, he didn’t travel with the team and is dealing with an injury.  While not having Dwyer (and his six goals) to deal with is delightful, TFC will still have to be wary of Sacha Kljestan and Justin Meram.

I want nothing more than to see Toronto right their leaky ship, they’re more than talented enough to make this happen, they’ve got players returning from injury and a mini homestand to build on.  I’m pretty sure I called for a 1-1 result on this week’s podcast, but I’m going to be optimistic and change it to 2-1 Toronto.