Home » Match Previews & Reports » Toronto FC vs Philadelphia Union: Can TFC Vault To The Top of the East?

Toronto FC vs Philadelphia Union: Can TFC Vault To The Top of the East? 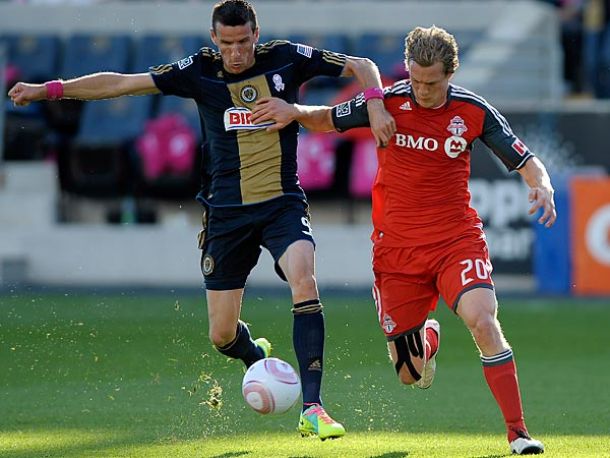 OK, last week has been put behind us and our Reds have to look ahead to another run of three matches in eight days; first up is the Union this weekend (followed by Orlando on Wednesday and then a return back to home to face the Impact next weekend).  The Union are having one of those up and down seasons but have done well enough to be in playoff contention and only three points behind Toronto; a win could see them making up some significant ground on TFC, the energy drinks and the pizza rats.  Like many teams in the league the Union are quite solid at home, with a 7-2-3 record and a lot of goals scored on the way to getting that record.  Although on the flip side, a young defensive corps has also let in a lot of goals and

If all the dominoes fall into place today then TFC could find themselves in first in the Eastern Conference; they’re just behind NYCFC and just ahead of the Red Bulls and the Union – it COULD happen – but will it?  The answer is unlikely, not because TFC are a bad team, but because this is a game on the road, Toronto are still battling injuries and Philadelphia have been rounding into form and will be difficult to beat.

Two reasons that the Union will be tough are Charlie Davies and Alejandro Bedoya.  Davies is recently back from illness and has had an immediate impact on the team, giving Union coach Earnie Stewart more options off the bench.  And of course Bedoya, the returning American international who joined the Union from Nantes just weeks ago, is capable of harassing opposition defences and seems a fit replacement for the departed Union legend Sebastien LeToux.

However there is good news for TFC; at least one (and potentially three) of their injured players are available to play in today’s match.  Returning is Steven Beitashour which a very welcome sight given injuries to other potential RBs.  Potentially returning are Justin Morrow and Eriq Zavaleta – Morrow of course was injured last week, while Zavaleta has been out for several weeks – having either back would be a big help given the Union’s propensity for scoring (four in their last game!).  The other question for Toronto is the fitness of Jozy Altidore and Michael Bradley – both are still coming back from injury and while Altidore has looked sharp he’s yet to go a full 90 and Bradley hasn’t looked that sharp.  *Note: newest Red Armando Cooper isn’t available for today’s match*

I’m hoping for a good game – should be lots of action as both teams are trying to solidify positions near the top of the conference – Toronto will be disappointed after last week’s game in Houston and Philly will want to prove that trouncing the tea terrorists was no fluke.  My podcast prediction was 1-0 Philly, but I think I’ll go with 2-1 for bad guys instead.  Prove me wrong Greg, prove me wrong.