Home » Analysis & Opinion » Toronto FC vs Philadelphia Union: Will TFC Rise Up To The Challenge of Their Rival?

Toronto FC vs Philadelphia Union: Will TFC Rise Up To The Challenge of Their Rival? 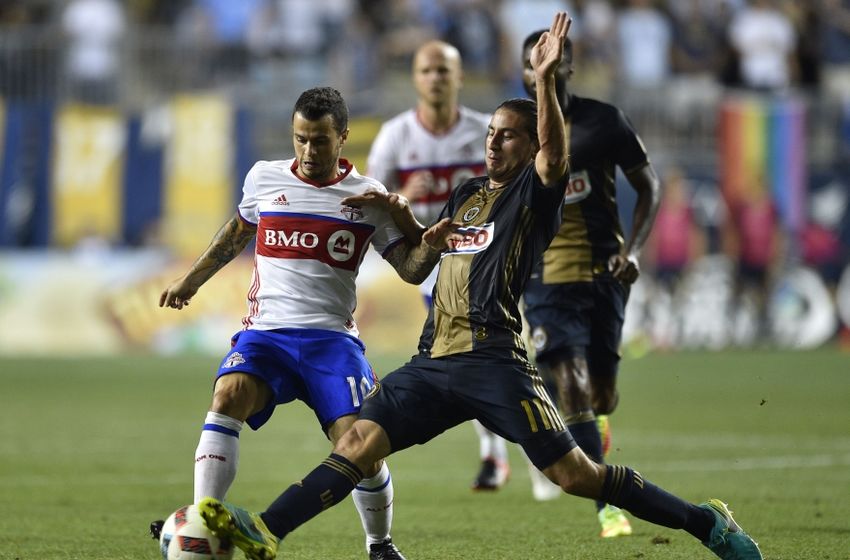 Play this while reading to get you pumped up:

Time for Week 2 of the 2017 MLS season, and for Toronto FC that means a trip to cheesy Chester to take on the Philadelphia Union.  This is the Union’s home opener and to dazzle the home fans they’re having the game ball delivered by a skydiver – yes, a skydiver.  And to continue on that theme they’ll have parachutes dropping memorabilia and gifts for the fans; heads up TFC, you’ve got three weeks to out-dazzle them!

Nevermind the circus start, the games the thing.  Last weekend both Toronto and Philly played fairly boring, scoreless draws against west coast teams (that game between the Union and Whitecaps though, man you can’t buy naps like that), and both will be looking to capitalize on missed opportunities in their season openers.  Of course the Union will be amped up as it’s their home opener, and teams tend to play a little freer in their home stadium.  There’s also the matter of TFC eliminating Philadelphia from the playoffs last season, so revenge is also likely on their mind.

Toronto will be looking to do well against an Eastern Conference rival, as well as a bit of redemption after their game against RSL (missed penalties are really getting tiring).  There’s an opportunity for the Reds to exploit the Union’s defense as neither Keegan Rosenberry or Oguchi Oneywu are particularly fast – though they are imposing and veteran players – that Seba or Jozy could match up well against.  There’s still the problem of Andre Blake (who had a very good game against the Whitecaps), one of the best keepers in the league – he will not be easy to get past for any of Toronto’s attacking players.

Last weekend we only saw a glimpse of what the newest Red (he’s from Barcelona you know), Victor Vazquez is capable of – it’s doubtful that he starts in this game, but expect to see more of him as the weeks go forward – if Toronto are having difficulty breaking down the Union’s defense, I’d expect Vanney to sub him on earlier than the last game.  Speaking of subs, is this the game that we see Tosaint Ricketts? He stayed on the bench last week, which is fine when you’ve decided to play for the draw, but we saw his speed and energy change games multiple times last season.  Vanney also has Chris Mavinga back with the squad (he’d been away due to the birth of his first child), which is good news as it is very much up in the air as to whether Steven Beitashour will be available to play this weekend.  Beita took a ball to the face in the RSL game and has a possible concussion – likely a game day decision but it won’t be a surprise if he doesn’t play.

The loss of Beita does raise questions as to who Vanney will have at the back; the name being floated for most of the week has been Tsubasa Endoh (remember him?) as his likely replacement.  Before hearing that, my initial thought was to move Hagglund over to Beitashour’s spot – Nick likes to get forward and between him and Zavaleta, Eriq had the stronger game in the middle last week.  However Endoh could be an interesting choice, he’s certainly at ease going forward – the question is whether he’ll be able to handle the defensive side of things.

I’m expecting this to be a livelier game than the one against RSL last weekend – the Union will come out strong (led by Bedoya and new forward Jay Simpson) and want to take control of the game early.  TFC won’t have to worry about ex-Red (and Wall of Honour resident), Maurice Edu as he’s still rehabbing his broken leg, and Warren (Regulator) Creavalle won’t start so perhaps the Toronto can avoid the ex-Red effect in this game.  There’s still Bedoya, Simpson and of course Chris Pontious to keep a watch for, but Toronto have a good team and should easily match up against the Union.  I still don’t see a win in this one though, so I’m sticking with my podcast prediction of 1-1.