Home » Analysis & Opinion » Toronto FC vs San Jose Earthquakes: Will TFC Blow Up The Quakes, Or Their Season?

Toronto FC vs San Jose Earthquakes: Will TFC Blow Up The Quakes, Or Their Season? 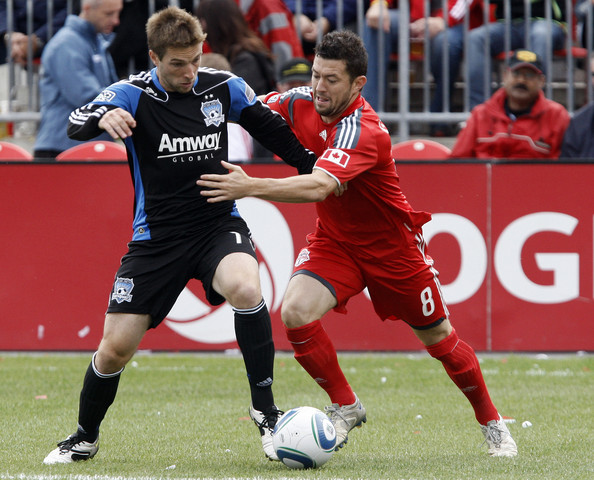 Must win.  If there ever was a game that Toronto FC have to win, it’s tonight’s match against the Earthquakes.  After the disappointing loss to the pizza rats, Toronto find themselves still mired near the bottom of the Eastern Conference and the chances to climb above the red line are starting to slip away.  The Quakes provide a golden opportunity to get points on the table, because they’re terrible – TFC have had a rough season but they’re still a very good team, whereas San Jose just keep stumbling.

Toronto should be buoyed by winning the Voyageurs Cup on Wednesday night (Weeeeeeee are the Champions!!); not only does it give the team a much needed boost in the immediate scheme of things, but also gives them something to be building and working towards for next year, regardless of what happens in MLS.  On the flip side, San Jose had a mini run of good form and then lost to the Colorado Rapids (also losing Shea Salinas to a red card suspension in the process), I mean who does that?   The two teams have a split record between them through their history of meeting; 5 wins each, and 4 draws – the last time they met TFC trounced them 4-0 at BMO Field, though San Jose won the last match at Avaya 2-1 – of course that was a very different Earthquakes team so really, no advantage given.

Must win – yes I’m going to say it again – they have to start beating teams at the bottom, they’re going to have very few opportunities to face teams of a lower quality the rest of the stretch and they need to take advantage.  The main concern for tonight’s match is who’s going to start for Toronto; both Jozy (hat trick) Altidore and Chris Mavinga are suspended, and Victor Vazquez appears to be injured, again.  SIGH.  So who starts in their places? Drew Moor should play, I’m guessing Liam Fraser or Jay Chapman for Vazquez and hey, let’s give Jon Bakero his first start, why not. Actually I think he’s a great choice for this match, get a little and large thing going with Seba.

Have I said this is a must win game enough times? It may feel like I’m overstating it, but at this point I could have written an entire piece just repeating that over and over, and it’d be valid. I’m hoping for a focused, defensively sharp performance from TFC this evening. It doesn’t have to be flashy, it just has to result in three points – that’s it. After tonight they’ve got two whole weeks at home (plus a week off in between matches), heading into that break with a win could be the turning point of the season.