Home » Match Previews & Reports » Toronto FC vs Seattle Sounders: Can We Just Give Them The Points And Stay Home?

Toronto FC vs Seattle Sounders: Can We Just Give Them The Points And Stay Home? 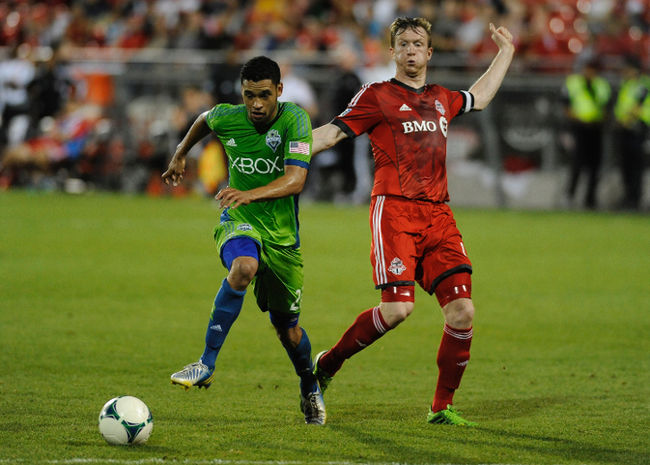 Whew, I don’t have to play in this game.

Yay for a week off!  Oh wait, Toronto FC doesn’t have the weekend off?  Can we umm, take one?  This is a difficult game to get excited about given Toronto’s current state.  Sure everyone is feeling good about the recent wins and goals, so why worry about a little road trip to Seattle?  Well, I’ll tell you why:

TFC is missing EVERYONE – Time to take a look at the bench, reserves, TFC II and players from last weekend’s Rock The Pitch – all will be called in to make up the team against the Sounders in tonight’s game (10pm ET, CenturyLink Field, TSN2).  Expect to see a lot of different faces in the starting XI and on the bench.  Toronto are missing four starters – including their two top scorers – a good chunk of the defense is injured or just coming back from injury and they’re off to play a team that they’ve only managed two wins against in the past (only once in Seattle).

Yes it’s true that Seattle have been on a terrible run of form (losing five in a row), but as their DPs have been regaining health they’ve started to win and have two wins in their last three games; both at h0me.  Obafemi Martins has picked right up where he left off before being injured and has three goals in those two wins; Clint Dempsey is rumoured to be back to full fitness and likely to be selected and possibly play.  Good times… Seattle of course are also a much stronger defensive team than TFC (OK, who isn’t) and have let in a paltry 30 goals as compared to the 42 that Toronto have allowed in two fewer games.

Of course Toronto have a decent spot in the Eastern Conference at the moment and have all those home games to play down the stretch, so tonight’s likely loss isn’t that damaging – it’s more the loss of so many players and the need to watch a cobbled together lineup yet again.  This is a massive opportunity for a number of players to show that they could be starters or feature more regularly in the 18.

As well there are a lot of questions to ask of this lineup and that starts with goals and who’s going to score them – expect Herculez Gomez to start as the primary strike option and likely be joined by Robbie Findley (Luke Moore has been banished to the outer realms apparently.  However this is one of the reasons that TFC signed Gomez, to support and replace Giovinco and Altidore when needed – he’s barely played since joining the team but seems full of confidence and raring to go.   It’s hard to guess at the lineup but Toronto are missing: Jozy Altidore (international duty), Sebastian Giovinco (injury), Collen Warner (suspended), Benoit Cheyrou (injured) and probably missing: Damien Perquis, Jackson and Daniel Lovitz.  Also there has been chatter that Justin Morrow won’t play.  So that’s close to an entire starting XI  and six starters possibly unavailable.  Super fun.

You’ll note that there are a couple of question marks in that formation as I honestly have no idea who’s going to be in the back or on the wing.  Clement Simonin has travelled with the team – could he get his first minutes since the beginning of the season?  Unlikely but again, anything is possible.  I can’t even say that 4-4-2 is likely, but with limited options a less challenging formation may be best.

Things You Need To Know:  The list is short this week

2. A combination of Stefan Frei and Chad Barrett will be why our Reds lose.

3. Michael Bradley will need to have his best game of the season if there are to be positives from this game for Toronto.

4. Chris Konopka will still be the No. 1 keeper after this game regardless of the score.

5. TFC have an important conference match against NE – that is where their focus lies, not on the west coast.

That’s it.  This is likely going to be unpleasant to watch, regardless of the vagaries and parity in MLS.  You should still watch of course, if only to see what XI Vanney decides to gamble with and to maybe get a glimpse of some of the kids and bench players.  Buckle up kids, this one is probably going to hurt.  Prediction: 3-1 Seattle