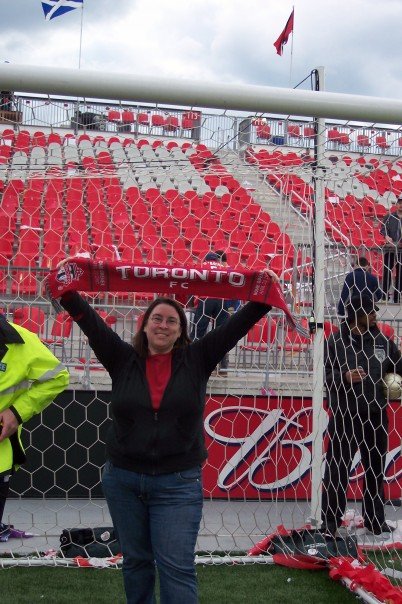 The above picture is from the final game of Toronto FC’s inaugural season.  When the game ended (a come from behind 2-2 draw against the tea terrorists), the fans joyfully stormed the pitch – I from my seats in the upper west stand – to celebrate.  It was a spontaneous explosion of happiness from the fans that had experienced an oft rocky first season with their new club; there was dancing, singing, chanting and lots of pictures (with ever present security to prevent anyone from taking souvenirs) as we all revelled in the moment.  That was the best last game of the year that I’ve had as a TFC fan – until this year – regardless of what happens in the final, Toronto’s win in the Eastern Conference Final has surpassed that day.  And (as I remarked to several people that night) I found it quite funny how many security guards suddenly appeared on the pitch in order to prevent such an invasion – that’s OK, we’re saving it for after the final.  🙂

The Final!  It’s still doesn’t seem quite real that tonight our Reds will be hosting and playing in this year’s MLS Cup Final against those sounding enthusiasts from Seattle.  And yet here we are – the final!  Seriously we’re in the final.  Keep saying it to yourself because it still doesn’t feel real, and honestly (for me at least) it won’t until the players come out for introductions.  Also, has this not been the LONGEST WEEK EVER?  Alright, time to try for some analysis, being my last preview of the year and all…

Toronto hasn’t faced Seattle much and they’ve not faced this version of the team as the Sounders’ resurgence happened after TFC played them to a 1-1 draw back in July when both Jordans (Hamilton and Morris) were the goal scorers.  It wouldn’t be until later on that month that Sigi Schmid was fired, Brian Schmetzer (and his orchestra) was promoted to coach, Clint Dempsey was officially out for the season (though that happened in August) and Nicolás Lodeiro was brought on board that the team that TFC invented started to turn things around.  Both teams finished the season with similar records, both teams are in their first cup final and both teams are considered to have passionate, engaged fanbases – sorry Seattle, we did it first and we do it better – and both teams fought like hell through the playoffs to make it here.

Seattle isn’t unlike the Montreal Impact in how they play and the players that will give TFC trouble.  Not having Dempsey (and his questionable rap skills) in the lineup hasn’t hindered them, in fact I’d say it likely improved them.  Easily picking up the mantle has been the combo of American phenom Jordan Morris and Nicolás Lodeiro – both have sparked the Sounders’ offence, have terrorised opposition defences, and oh yeah there’s that Ozzie Alonso guy too – all have speed, playmaking ability, and score goals.  Wheee.  Have I mentioned the ex-Red effect with former TFC starting keeper Stefan Frei in net and brief Toronto hero Herculez Gomez a possibility off the bench?  Considering how both left town there’s always a bit of trepidation around ex-Reds with chips on their shoulders.

Toronto’s defensive side hasn’t been rock solid through the last couple of games and if Justin Morrow and Steven Beitashour are pressed up the pitch then there’s all that space just waiting to be exploited.   Does Vanney start Will Johnson again for the defensive and big game experience?  I say yes and like last Wednesday have the Legend Benoit ‘Benny Balls’ Cheyrou in reserve.

Toronto’s fortunes continue to rest on Jozy Altidore’s broad shoulders and Sebastian Giovinco’s ability to score (or assist on) big goals. While the supporting cast has stepped in (Tosaint Ricketts anyone?) and helped seal the deal on multiple occasions during the playoffs, it will still fall to the two strikers to create the lion share of the chances.  Although speaking of Ricketts; Vanney might want to bring him on sooner as TFC have yet to be scored on once he’s entered the game – food for thought on the VanWagon.

I actually like this match-up and think it’ll make for an exciting and hard fought game.  Yes it’s going to be cold as hell (seriously, over dress. wear layers – lots of layers) and it might snow, but so what?  It’s the fucking MLS CUP FINAL!!  Will we even feel the cold?  OK, yes, yes we will but it’ll be blunted by the fact that we’re getting to watch our team – OUR TEAM – in the final, in our stadium, in front of our fans.  It’s hard to ask for much more, and after nine seasons of watching them find new and different ways to mess things up, they finally got it right.  I didn’t expect this to happen this year, so honestly – and I truly mean this – no matter what happens tonight I’m going into the off season a happy TFC fan.  But if they win?  Oh the joy and bedlam – the tears, the hugging, the celebrating – it’ll be fucking amazing.  So one last time: COME ON YOU REDS!!  Let’s do this boys, give us the happy ending.