Toronto FC vs Sporting KC: Will TFC Be In Heaven, Or Blue Hell? 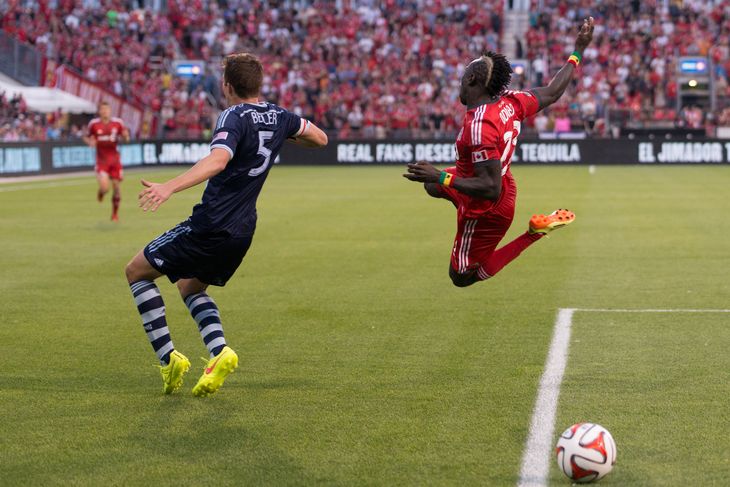 Can Toronto FC’s dream start to the season continue this evening in Kansas City?  Unlikely – but then again I’d have called you crazy two weeks ago if you said that TFC would be undefeated at the moment; including a 2-0 win over last year’s Supporter’s Shield winner, and a come from behind draw in the house that Villa built.  There’s been little to truly quibble about Toronto’s start to the season and honestly a fair amount to like.

There are of course still questions regarding the attacking portion of the team and what the midfield actually looks like, but amidst those questions and a number of injuries the Reds have managed to reach the halfway point on Bill Manning’s minimum goal for the season starting road trip. So what of this game against Sporting KC?  One of Toronto’s nemesis as it were, in one of the most difficult places to play in MLS, and also undefeated on the season – oh and TFC have never won at their current home, AND they haven’t beat them in three years.  Whee, this should be fun.

Playing SKC is usually a daunting task; they’ve a strong core group of players that have carried forward since they last won the cup in 2013 – take a bow Graham Zusi, Matt Besler, Dom Dwyer, Benny Feilhaber and Chance Myers – that’s a lot of talent right there.  Add in Brad Davis – SO weird to see him with anyone other than Houston – and the still recent return of Roger Espinoza and well, you’ve a group of players that any team would love to have.  And don’t get me started about Jacob Peterson.  They’ve also had the same coach for what seems like forever (seven years) in Peter Vermes which not only makes me completely envious, but gives the team the kind of familiarity that is apparent whenever SKC play.

Toronto is facing it’s own challenges coming into this game; Dan Lovitz is injured and Jozy Altidore is apparently ready to play – and of course the team is still gelling as a group which isn’t easy to do on the road.  But why is Jozy’s return a challenge?  He’s not played at all yet this season so that’s the biggest worry; how much rust does he have to shake off?  The team could certainly use a larger presence up top so that Seba doesn’t have to keep trying for long balls – but should he start?  Absolutely not – the team has a bye week coming up, bring him on as a sub and let him get some minutes but is it worth over-exerting at this point?

Things To Note And Watch For:

This is likely to be a low-scoring (we hope) game; both teams play a similar style and while SKC are better at it, Toronto has shown themselves to be able to absorb pressure and turn games around so far this season.  But if they lose is it really a big deal?  No.  Not at all.  Unless they completely embarrass themselves, and even then, every team has a bad game somewhere along the line.  Will I surprised if they lose?  Not at all.  I hope they get a positive result of some kind; any point would continue to prove that this is a different TFC than seasons past and that they are finally building towards something.  However on the podcast I called for a 2-1 loss so I’ll stick with that.  This should be a fun one folks, make sure you tune in.