Home » Match Previews & Reports » Toronto FC vs Sporting KC: Will TFC Need Super Seba To Once Again Save The Day?

Toronto FC vs Sporting KC: Will TFC Need Super Seba To Once Again Save The Day? 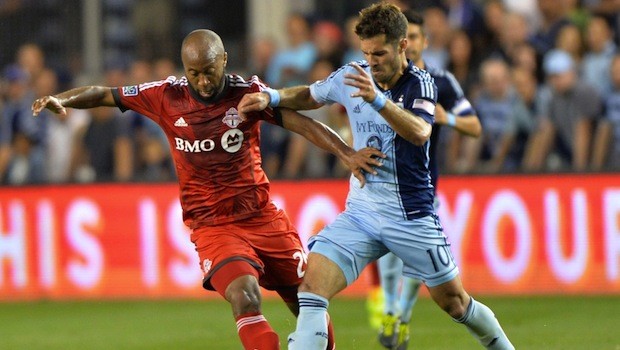 Well Wednesday night was fun!  Seriously if you didn’t watch or attend then you really missed one of those rare joyous moments that we as TFC fans get to experience approximately once a year.   But it’s been a long time since I was at BMO Field and experienced the entire crowd erupting into cheers, all chanting and celebrating as one – fun; pure unadulterated fun.  But as fun as that was, we have to put it behind us and look ahead to today’s match against Sporting KC (4pm, BMO Field, TSN).

The teams are actually fairly evenly matched when it comes to games played at BMO – KC has one more win but otherwise; they’ve been one of those teams that Toronto show up against, at least at home.  Although TFC haven’t managed a win against KC in their last five meetings, there’s an opportunity to build off some momentum in their only meeting this season.  The Sporks are having a solid season after relocating back to the Western Conference, sitting fairly comfortably in fifth with the top half of the table only separated by five points and SKC with multiple games in hand.  Also boasting the league’s stingiest defense with only 21 goals allowed so far this season (Matt Besler take a bow), this should be a more difficult game for Toronto in terms of scoring – even with Super Seba on the pitch.

1. Damien Perquis is suspended.  Not necessarily a bad thing; some time on the bench might help get his head on straight.

2. Benoit Cheyrou is suspended. The DisCo strikes again.  Yes, the challenge was a strong one, but it’s disappointing to see it come on the heels of his best performance in a month.

3. Michael Bradley will start.  How he slots back into the team after a month away will be key.

4. Jozy Altidore will start. He needs to have a strong game to make up for last weekend’s idiocy.

5. Herculez Gomez will not start.  Everyone will have to wait a couple weeks to see him in person.

6. Neither Dom Dwyer or Roger Espinoza will play – huzzah!

7. Graham Zusi and Benny Feilhaber will both still play – boooo!

8. One of the above will likely score – both have very good track records against TFC.

9.  In case you missed it: Bright Dike – waived, Warren Creavalle – sent to Philly.

10. Robbie Findley will not start – everyone rejoice.

11. Seba will continue to do Seba things.

Toronto have an opportunity to keep pace with the Red Bulls ahead of next week’s away game as well as keep their place atop the mushy middle of the Eastern Conference. How the midfield adjusts to the loss of Cheyrou and the addition of Bradley will be key.  Also, can Jackson put in another strong performance at RB?  And lastly how will the partnership of Kantari and Zavaleta work out.  Those are the keys for today – not whether Seba will get another hat trick (he will, but probably not today) – yes TFC have gone all in on the ‘the best offence is a good offence’ school of thought but today they’ll need to smart in the middle and tight at the back.  Prediction: 2-1 TFC