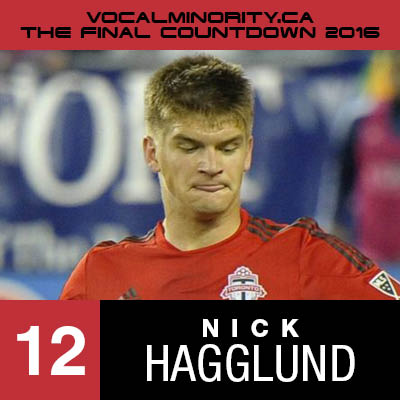 Mark: 18 – Fell to obscurity and then fought back into the starting eleven right at the end of the season.  They haven’t quite beat the forward out of him and I’m perfectly fine with that.

Ah, Nick “The Salmon” Hagglund.  The defender who thought he might be a forward, then had that beaten out of him, came back to solidify himself as a starter and then scored a header where he smashed his entire body through that to send the game into extra time against Montreal.  Man, what a goal.  Good times…

Now a three-year veteran, Hagglund has had to fight his way back into the starting XI.  Beginning the season at right bench, he made his first team appearance in the Voyageurs Cup, but not in a league game until June, where he came on as a late match substitution.  After that, he was in the rotation of defenders until the backline roster was solidified, putting him with Moor and Zavaleta.  Late in the season, he looked to be a lock starting 3 of the last 5 matches (with one substitution) and played in all of the playoff games.

More often than not, he’s looked very capable, very confident in shutting down opposition forwards.  Played very well in the 3-5-2 setup, but at times could be found caught out of position, and luckily, with little catastrophic consequence.  He shined in the postseason, where the back line kept their composure in dark times (the now and forever legendary Montreal-two leg semi-final) and in the more hilarious lighter times (the calamity of NYCFC the round before).

Hagglund also had 4 appearances for TFC II : The Spy Who Shagged Me and earned a USL Team of the Week award.  Also bagged a goal there.

Kristin: 13 – One of the biggest surprises on the season – to someone that I thought was just OK and needed time with TFCII to hone his defensive skills, to a defender that I was happy to see on the pitch by the end of the season. I think he was even MOTM for me once.  Plus, THAT GOAL.  Ah, they grow up so fast.

Duncan: 12 – Happy to see him get back into the first team. Still really needs to work on his passing and possession keeping, but did a good job defensively, even when being asked to basically play left back in the 3-5-2. Then of course there was that goal against Montreal which bumps him up a few places.

Mel: He’s really come into his own this year as well.  Solid on the back line.

Mark HSV: Based mainly on his playoff performances. Didn’t think he was great early in the season, but somehow the 3-man defense with him in it turned out to be very solid. Considering he had Morrow constantly tracking back though, he maybe didn’t have to be great.

Steve: I love Nick Hagglund – but he makes a lot of mistakes.

Jen: Solid again, just like the rest of the backline, except younger so that’s possibly more impressive (or at least will be in 5 years).