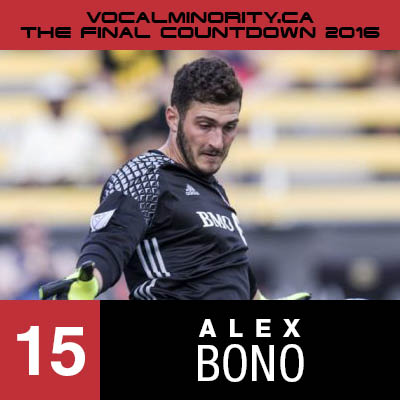 Kristin: 17 – TFC’s big SuperDraft grab from 2015 – wanders more than I’d like, but settled in and did a good job of subbing in for Irwin. Not a No. 1 keeper yet; but the potential is there.

From TFCII to the big leagues in the blink of an eye!  That’s basically what happened with Alex Bono this past season.  Taken high in the draft (6th) by TFC in 2015, Bono spent the season with TFCII (poor Q, he’s never getting a chance) and then in 2016 he became the de facto back-up to new No.1 keeper Clint Irwin.  As Irwin is a more than capable keeper it didn’t seem like Bono was going to see much time with the first team; and then disaster struck.   In what was already a controversy filled game against Orlando City SC, Clint Irwin went down late in the game with what was later diagnosed as a quadriceps injury – time for Bono to make his mark!

Irwin would be out for six weeks, six weeks in which Alex Bono would have to prove himself, and well he did a pretty solid job.  TFC went on what was a rather good run of form (8-3-4); in which Bono acquitted himself quite nicely.  There were (and still are) concerns about his tendency to wander from the net and the box in general – in fact we spent his first few games yelling at him to stay back and musing about some sort of tethering system to keep him from roaming.  He balances that with some great agility and to his credit he settled in well, and was a more than able back-up through the summer.

As it’s TFC there was a bit of drama over whether Bono should be left in net regardless of Irwin’s health later on in the season as the playoffs began to loom – but luckily Irwin resumed his place in net for the playoff stretch.  This isn’t a knock on Bono as he surprised me and many others with the quality of his play while Irwin was out.  He (should) get less playing time with the first team this season, which shouldn’t hinder his development too much – he’ll get the Voyageurs Cup games and likely the odd start during the compressed weeks.  There’s definitely talent there, and potentially a future as a No. 1 keeper for either TFC or another club if trade bait needs dangling.

To close things off here’s a rather nice save on Matias Laba in the Voyageurs Cup:

Duncan: 18 – Had the odd shaky moment, and there seemed to be at least one very alarming adventure in every game, but all in all, he did very well in the games he replaced Irwin. Any ‘who’s the number 1 now?’ controversy was unwarranted, but he’s a decent backup option, with potential for more in the future.

Mark: 17 – Once you get past those first two games, he turned out to be a capable keeper.

Mark HSV: A good backup keeper when Irwin was down, and could be the future starter for TFC. But I like Irwin better.

Duane: I maintain that they win the shield if Irwin doesn’t go down.

Steve: Outstanding job filling in – to me a big surprise of the season.

Mel: He stepped up big when we needed him to.

David: IMHO, Alex would have been a better choice down the stretch even after Irwin was fit again.  When we briefly lost Irwin in the expansion draft I wasn’t as upset as a number of other folks.  A great young keeper that, like a fine wine, should improve with age.

Jen: He made a few mistakes, but otherwise fully covered for Irwin and frankly impressed.  Q who?