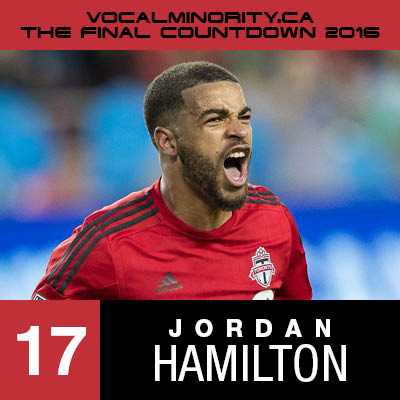 Kristin: 21 – Showed well in the summer when the team was struck by injury, still waiting for his breakout moment.

Wow I put Jordan at 21?  Actually I’m good with that – though I could have easily put him a bit higher, his ranking is less on his quality than on his playing time.  I like Hamilton, he’s local, he’s got some skill and he’s been brought along through Toronto FC’s academy – what’s not to like?  Hamilton has had a rather slow trajectory the past few years after signing as a homegrown player in January of 2014.  His rise through the Academy and the Canadian national teams all showed signs of the next breakout player for TFC.  However, until this past season he’s had an up and down experience with the team – in 2014 he did get loaned out to the Wilmington Hammerheads and did well – appearing in eleven games and scoring five goals.  After that he had a brief loan to C.D. Trofense in Portugal – a good opportunity for the young player to get minutes, but also to get experience with a different team and league – all excellent things for his development.

But then in 2015 Hamilton seemed to disappear from the radar of TFC – he spent almost his entire season with TFCII (playing in twenty-four games but only scoring three goals), getting only two games with the first team (and thirteen minutes).  I remember having a lot of conversations with people about him that year; most wondering what had happened to him and why wasn’t he getting more chances with the first team – but since we’re not privy to the inside scoop that will remain an unknown for us.

Happily for Hamilton 2016 was a much better year for him; he spent pretty much his entire time this past season with the first team and when player injuries and absences cropped up in the summer he got a number of chances (eleven starts in the regular season and playing in the Voyageurs Cup).  In the VCup Hamilton scored three goals including a brace in June against Montreal.  He also had the tying goal against the Crew in mid-July, actually the only goal, on a lovely ball from Jay Chapman.  This past season may not have been a full break out year for Hamilton but it certainly showed what we’ve been hoping for and expecting from him.  Now lets enjoy his first ever goal for Toronto FC:

Duncan: 17 – Got a good run of games and didn’t do badly at all, scored a few goals so at least definitively put himself ahead of Babouli in the backup striker stakes. Difficult to see him getting many minutes barring an injury crisis, hopefully can get plenty of time with TFCII to keep his development going.

Mark: 14 – Expected nothing from the kid as a fill-in, bagged 5 goals. Hope he grows to earn a permanent spot on the bench.

Duane: Oh it was a great run. Needs to do it over a full year

Mark HSV: Finally got a chance this year when other strikers were injured. I don’t think he is very creative, but at least he can finish. It’s great to have Ricketts as the top sub at striker position now though. Not sure what the future will hold for Hamilton.

Richard: Still developing, but has some potential