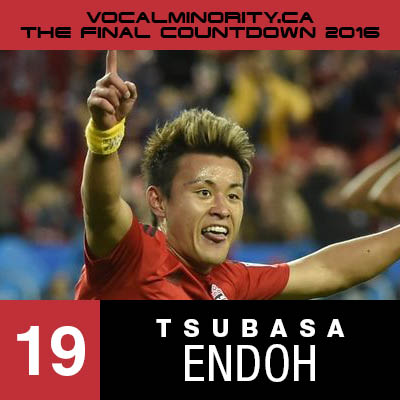 For the Vocal Minority crew, Endoh was going to be a success no matter what. He’s from Japan! We’ve not had a Japanese fella here! VENDING MACHINE PANTIES!!!

Despite his no-doubt bewilderment at our GO Trains, Endoh did reasonably alright this year. There was a point in the mid-season where his crossing seemed to get rather good and he seemed more composed. He even started stealing goals off of Giovinco by physically getting in the way of his shots.

Endoh could very well craft a decent niche for himself at TFC or the alternate – get traded for a bag of beans and do really well at (INSERT RANDOM WESTERN CONFERENCE CLUB HERE). For our podcast’s sake – may Danny Tokyo long bring his robotic (I assume) stylings to BMO Field.

Duncan: 20 – Decent first season from Endoh. Don’t think he’ll ever be a star in this league, but I’d give him a decade or so as a valuable squad player.

Mark: 20 – First two games looked like they really found a treasure and then the slide to the bench happened.

Kristin: 18 – Captain Tsubasa!  Good backstory, enthusiastic, can be fun to watch.  Not sure what his role is next year but good bench option.

Duane: I feel guilty that I’m not a fan.

Steve: Great start to the season, but clearly lost momentum for some reason – bright bright future.

Jen: I remember some good things but they were so long ago that I figured this was as high as I could rank him.

Richard B.: Started well, flattered to deceive- one dimensional

Mel: He had some bright spots this year. Some more playing time and experience and he could very well become a top player