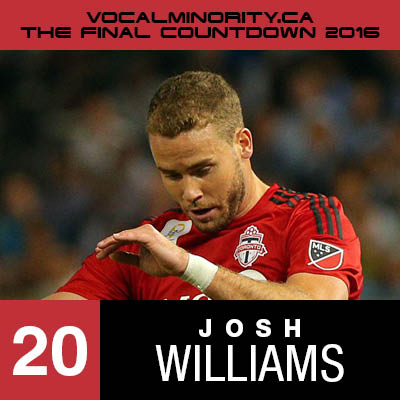 Was a former health concern of Josh Williams.

Despite 24 appearances in 2016, it’s almost like Josh Williams wasn’t here. As the younger duo of Hagglund and Zavaleta improved and moved into the starter’s roles, Williams gradually shifted further down the bench. Much like over coagulated blood in veins – he had trouble breaking through.

As the playoffs dawned, Williams fell completely off of Greg Vanney’s sexy bearded radar and the writing was on the wall as the season ended. Williams has recently joined Columbus Crew (Grrr! Rivals! Judas! No – not really.) and will likely continue his steady if unspectacular MLS journey there.

Mark: 15 – Capable bench-depth defender.  Did well enough when called upon.

Kristin: 20 – Seemed like a solid pick-up in 2015, then just kind of faded away this season. Hope things go well in Columbus.

Duncan: 21 – Not sure why he didn’t play more really, especially when we went to the 3-5-2. Good luck in Columbus.

Mark HSV: A solid backup defender who probably could have played for either Zavaleta or Hagglund when needed. TFC will need to find another guy like him with some experience for next year, even if they don’t play a lot.