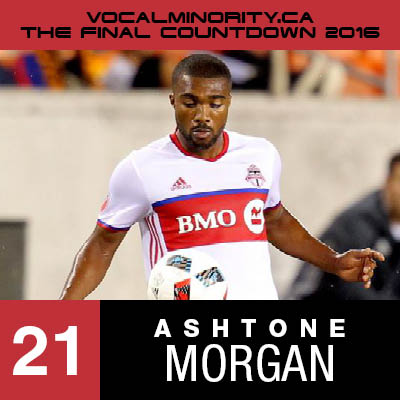 Kristin: 16 – The nasty leftback that always seems to get left back.  Huge fan, think his conversion to winger can’t come soon enough.

I’ve been a fan of Ashtone Morgan since his academy days and was thrilled when he joined the first team back in 2011.  In the early years he saw a fair amount of time and was the de facto leftback for TFC; and each year I kept hoping that this time it’d be his breakout year.  He has decent speed and instincts – though is usually better going forward than defending; he’s been known to throw in some nice crosses – but hasn’t managed to hit that next level.  Unfortunately it’s hard to move up a level when the development and growing success of the team has meant that better players (hi Justin Morrow) have been brought in and therefore Morgan gets shunted to the bench.

The 2016 season was not to be much better for Ashtone as he only made seven appearances in regular season games (no starts), two starts in Voyageurs Cup and then spent the rest of the year either on the bench or injured.  In the Voyageurs Cup he showed well, and he and the other younger players supported some of the first team to bring TFC the title.  But a solidified backline – even while Vanney was tinkering with formation – meant that there would be little extra time for him.  And then the capper was an injury a little more than halfway through the season that would see him sidelined for the rest of the season.

The good news is that at the end of last season he was re-signed to a deal with the team, whether that means he’ll get much time behind Justin Morrow – especially with the likely changes to the CCL format – in the upcoming season remains to be seen.  Personally I think that Vanney should give him time as a winger – helps to deflect his defensive issues and exploits his attacking abilities; this would give him minutes and help give some variety to the attack.  But that’s another story.

Let’s close off with a highlight (albeit from last season), for Ashtone’s time with Toronto FC: his becoming the first player to reach 100 appearances with the club:

Dave L. – Ashtone will be challenged to get back in to the line up regularly once he is fit.

Mark HSV – I like Morgan but he never gets a chance to play. It’s tough being the backup for Justin Morrow though.

Jen – I remember him from other years.