A particularly anonymous and mediocre season for Dan, here’s what I remember. NYCFC picked him up in the draft and then, no wait that was last year, bah. Listening to the VMP 2016 review and apparently he played in the first game in New York, and he’d got a new sensible haircut, and the commentator said something about ‘the Lovitz role’ which immediately garnered much scorn and it was decided that that should be used only with negative connotations, ie

Player: Aaaaaaawwww. *slumps shoulders, goes to sit on the bench*

I remember him once almost scoring with a header, the ‘Lovitz in the air’ moment we’d all been waiting for, but again, that might be last year, I genuinely don’t know. TFC’s website tells me he played 406 minutes over 12 games, and got 6 shots on target. Good for him.

It’s a shame really as TFC could really do with a good winger, but after 3 years here and at age 25, you can’t really suggest he’s going to get better, and so I’m not sad he was released in December. Best of luck in USL Dan.

If you want to get to know Dan Lovitz a bit more, here’s the ‘we are TFC’ article about him.  Apparently Clement Simonin moved in with him this year, that’s nice. And he tries to emulate Messi and Bale, model his game on them. Hmmmmm.

Finally, enjoy this Valentines card TFC put out, where they ruined the pun. Is the song ‘Love is is in the air’? No it isn’t TFC, go sit in the corner and think about what you did! 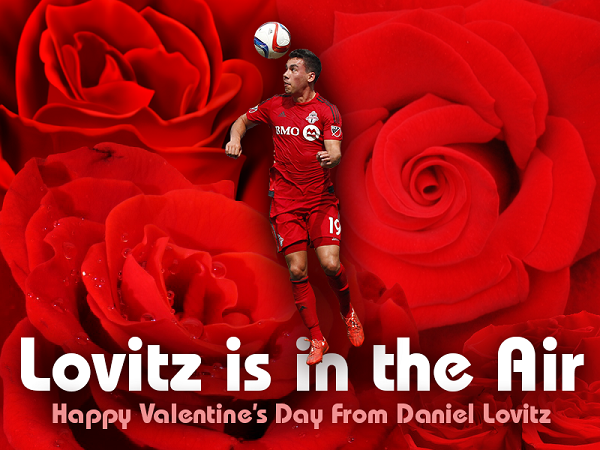 Tony: 25 – So glad we grabbed him back from NYCFC for… ummm…

Kristin: 25 – He umm, does stuff.  Running stuff and apparently something with ball crossing.

Duane – LOVITZ IN THE AIR…ewwewwewwewew (I got nothing)

Mark HSV – Lovitz is a serviceable player, but never brought anything interesting to the team. Nothing against the guy, but there are other midfielders I would prefer to see in a match.