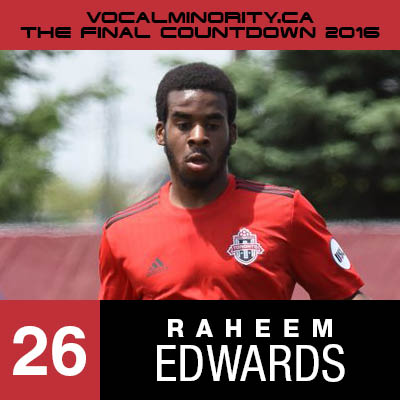 Mark: 26 – I will treasure all of his contributions this year.

Raheem Edwards made his debut for Toronto FC in a Voyageurs Cup match against Vancouver, coming on for Osorio in the 86th minute in late June.  He followed that performance by making his league debut in an 88th minute substitution coming on for Eriq Zavaleta.  It’s probably more time than that, but for the purposes of the narrative, we’ll ignore extra time.

The 21 year-old midfielder has been with TFC for the last few seasons, almost exclusively spending his time with TFC II: Judgement Day. Look, we’re thrilled that another local boy made it through to the first team.  I thought about filling his page with facts about Raheem Sterling, but there isn’t much fun in that after reading his wikipedia page.  Facebook shows me that Raheem Edwards is trying to sell his 99 Honda Accord for $1500!!!  WHAT A DEAL!!! Wait, that’s Bloomfield, CT.  Too far. Probably wrong guy.

He made 20 appearances with TFC II: The Quickening scoring 6 goals, tied with Shaan Hundal for the lead.  He also was named to USL Team of the Week on three occasions.  #48 on his shirt, #26 in this list, #1 in our hearts.

Kristin: 26 – Played in a couple of games and looked pretty good for his limited minutes – current TFC II player most likely to make the jump to the big team.

Duncan: 24 – didn’t play much, but the V-Cup game in Vancouver, he had a fantastic few minutes. On a per minute basis, probably TFC’s player of the year.

Richard B. – Read Brian James & Raheem Edwards at the same time and saw ‘Brian Edwards’ – went into a cold sweat

Duane – He looked great in his emergency start. Would love to see him get a HG

Mark HSV – 6 goals for TFC II and 2 minutes in a regular season TFC match?  This kid’s moving up!

Dave L. – I recognize the name, but for the life of me I don’t remember seeing him actually in a game.