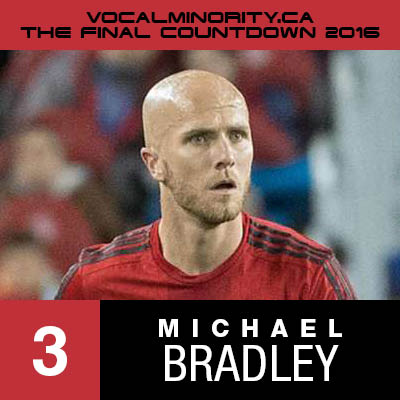 Kristin: 4 – So weird; I actually liked Michael Bradley this year.  Vanney found/he agreed to a new position on the pitch, he didn’t try to do everything himself every game, defensively worlds better, huge towards the end of the season. But please stop taking free kicks. K, thanks.

Michael Bradley has been with Toronto FC for three years and I disliked him for the first two – I never saw anything that made it seem like he was worth the high salary, the captaincy (other than looking serious and being shouty all the time), and the coach trying desperately to fit the team around him instead of him fitting into the team.  That last part was really my biggest issue; Bradley had no defined role his first two seasons with TFC – it seemed to change from game to game, hell sometimes in games.  There was no consistency and seemingly no plan to how to utilize him – this often ended up with him trying to do everything (read: too much) by himself.  He didn’t trust the defense, he took a lot of shots (averaging 55 over the two seasons) and spent a lot of time running about – which looks industrious but rarely led to anything useful.

He’s clearly a talented player, but if you can’t use your talented player properly then what’s the point right?  I’d have gladly seen Bradley traded and less expensive options brought in by the end of last season – two years of only occasional good performances was wearing.  And then 2016 happened and well, I found myself suddenly saying nice things about Bradley.  When Vanney settled (for part of the season anyway) on the diamond midfield with Bradley at the base, he started playing a much stronger defensive game – breaking up plays, protecting the backline, working to distribute the ball instead of carrying it forward – a marked change.  In fact his new ‘stay at home’ attitude showed Bradley at his best; he was tenacious, he won midfield battles, his passing improved – he was MOTM for me more than once so impressed was I by his performance.

This is not to say all was sweetness and light, the transition through the midfield to the attacking third was clunky at best through much of the season, Bradley still takes far too may free kicks and corners (seriously, please stop, we beg of you) and he still doesn’t quite trust his backline having too often dropped back to take the ball from Drew Moor when Moor is more than capable of bringing the ball out/initiating the attack from the back.  But even with that, this year I was – for the most part – quite happy to have Michael Bradley on the team, and his play during the post-season?  Probably the best soccer we’ve ever seen him play.  More of this please in 2017.

And while he may have only scored one goal this season (that’s what happens when you only take 12 shots), it was one of the most important of the season:

Duncan: 3 – Some welcome positional discipline this year from Bradley, playing one spot, not trying to do too much and generally doing it quite well. Missed a lot of time in the middle of the season, and had a few rough games after he came back, but looked very good during most of the playoffs.

Tony: 3 – Bronze. The most monotone of places.

Mark: 2 – Really stepped up in the big games. Wavered in quality in small batches, but when on form, which was more often than not, was outstanding running the midfield.

Mel: 1 – He lead like true leaders do- by example. When he’s in beast mode, nothing stops him. Also, he’s easy on the eyes.

Duane: 4 – Found his role. Stuck with it for most part.

Steve: 4 – If he learns to make a 20+ yard pass, he’s the best midfielder in the MLS – holding midfield machine but such a mediocre medium/long passer its painful to watch at times.

Mark HSV: 3 – All 3 of TFC’s DPs were great this year and Bradley finally found his role. He wasn’t relied on for offense or defense because of solid players all around him, so he could focus on being a mammoth midfielder who shut things down across the field. His best season for TFC by far.

David: 1 – Sitting behind the bench all season I’ve been able to watch how Bradley interacts with the team.  During warm-up, whenever there is a break he’s talking with everyone in the starting 11.  During the match his leadership skills make him by far the single best captain we’ve had in the past 10 years. That and his play on the pitch is pretty darn good!

Jen: 3 – AMERICA can we stop under-rating american DPs for like 2 seconds? thanks. he works hard and provides maturity, just look at him on the field all the goddamn time, he has no chill but also all the chill, it’s impressive really.