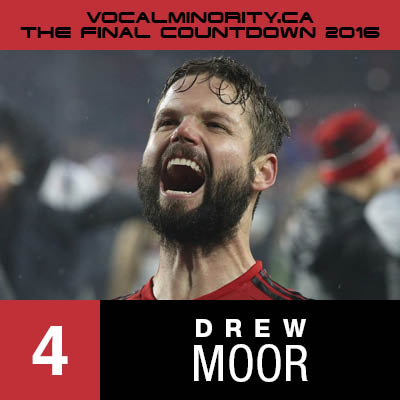 Duncan: 1 – This is a bit of a hypothetical number one ranking really as it’s based on what probably would have happened if he got injured. Bradley, Altidore, Giovinco, Irwin, all missed time at various points in the season, and we got by fine enough, and I don’t think that’d be the case if Moor went missing. The difference between last year’s defence and this years was huge, for many reasons but Moor was a big one, as much for how he helped those alongside him, especially Hagglund and Zavaleta towards the end of the season, as for his own play. His own play was generally good of course, including being a set piece threat up front. The winners of these things pretty much always have injury riddled disappointment follow up seasons, so good luck with that Drew.

Of course we all remember 2015 and it’s 58 goals allowed, followed by the embarrassing fiasco in Montreal. Bill Manning talked big about wanting to cut that down to below 45. Happy to hear it, but very skeptical. Moor being thr first new signing was very reassuring sign of following through on that talk of a new direction.

And It happened, 39 goals in the regular season, then 6 in 6 playoff games. Not too shabby. It’d be churlish not to give some credit to Greg Vanney and the more defensive tactics employed, especially at the start of the season in that long road trip, but Moor was a huge part throughout the season, playing 32 out of 34 games in the regular season, plus every minute during the playoffs.

He’s obviously a good player in his own right, smart positioning, good tackling, a big body, good in the air, all that sort of thing. Then you add in the effect he had on those around him. Organising, talking, helping, pretty much every centre back partner he had looked better than you’d expect. Damien Perquis looked like a decent player (if too expensive) and Eriq Zavaleta and Nick Hagglund did the defensive work very well throughout the second half of the season and the playoffs.
Always a threat up front from set pieces, he also chipped in with 3 goals, a header inside the near post against Vancouver, the game winner against LA with a diving header to the far post, with a hint of offside to it, and the best of the 3, another diving header against Philadelphia you can see below.

He’s also one of the more entertaining players aside from his play as well, getting the vocal minority’s vote for best social media player, whether it’s his dogs on Instagram, bringing his baby out for the anthem, or his general relaxed fun personality, nicely shown off when he was interviewed at a leaf game just as a goal was scored, showing off a delightfully Chris Pratt oh my god that just happened face. In the second leg against Montreal, I enjoyed him following up on Altidore’s goal, picking the ball up and just hoofing it anywhere before being the last man to jump on to the pile of players. All in all, he seems a very likeable man, so yeah, number 1.

Kristin: 2 – One of the best defensive signings ever. Fantastic signing – thanks Colorado! – makes those around him better, one of the main reasons we made the playoffs – could have easily been No. 1 on my list.

Tony: 2 – When there was one set of footprints, Drew was carrying us.

Mark: 3 – Anchor with a fantastic beard. Hope he retires here.  An absolute rock and so reliable.

Jen: 4 – Super totally solid and we would not have done so well without him, God bless

Mel: 9 – He’s the defender we’ve needed. Experienced, and not afraid to direct from the back. Also, goals.

Mark HSV: 4 – A toss-up between Morrow and Drew Moor as to who was TFC’s best defender. But seeing as Moor finally solved the 10 year long CB problem TFC has had, it goes to him. Could be a future captain for TFC as well.

David: 6 – Drew is the defensive player we’ve needed since, well, ever?  You can see his influence on the younger players (Nick H).