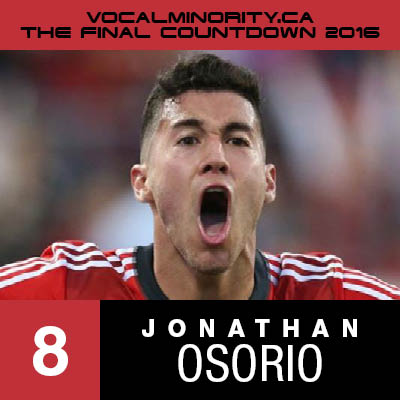 Osorio had a mid-season epiphany that seemed to be documented by the Vocal Minority.  Earlier on in the season, he had a habit of making several touches before attempting to shoot the ball.  Sometimes, it was having to beat EVERYONE before attempting the shot.  Others, it was needing to settle the ball before having a go.  His confidence to “pull the trigger”, be it shoot or pass, was often questionable.

We have suggested that he just needs to have a go.  Just “have at it”.  Just “bang it in”.  Just (insert other phrase for “shoot the f’ing ball” here).

And then he did.  And then he scored.  We fixed Oso.  You’re welcome.

However, speaking to his consistency, he was often in the right place.  Sometimes attacking midfield, sometimes playing towards the corner flag.  Right place at the right time.  Sometimes he’d get frustrated.  Sometimes, he’d say ‘freakin’ in place of bad words during a half-time interview which was hilarious.  Osorio was a hard worker, a good soldier and noticeably improved from game to game.  It would be understood if you were on the fence about him at the start of the season, but I’d be surprised if you weren’t on his side by the end of it.  Also, he’s a fan in a shirt and plays like he loves it.

He scored 6 goals in all competitions with 3 assists making 40 (!) appearances (mathematically, you can make over 40… go figure, tied with Morrow, one less than Moor), 2 in each of the Voyageurs Cup, regular season and post-season.

As a side note : Benito Floro wouldn’t pick him for the national team and now he’s been fired and about to manage a club in Central America.  The lesson is, pick Oso.  Greg Vanney did and they damn near won it all.

Here he is scoring what would be the winning goal against the Union in TFC’s first round play-in game (see Oso, don’t think, just shoot!):

Tony: 8 – Two steps forward, one and a half back but solid-ish

Duncan: 8 – Another decent year for osorio, but another one where he didn’t blossom into the star we all hope he could be. Tidy and reliable are good things though. Wasted a lot of scoring chances though, and what was up with those frosted tips?

Kristin: 8 – Those frosted tips drove me crazy all season.  Took awhile for Oso to look comfortable on the pitch this season, but happy to see some minor progression from him this year and expect good things from him next year.  Also; Oso – don’t think, just shoot!

Duane: 9 – 10th most accurate passer in MLS, but still hard to see.

David: 8 – Oso continues to get better.  His goal production comes as an afterthought for me, it’s his strength in the mid and compliments Bradley nicely.

Mark HSV: 6 – I want to rank Oso higher because he looks really good as an attacking mid and he is great on the ball. Just a few too many players with better overall seasons above him. Gotta get back on Team Canada too. This guy is great.

Mel: 8 – He stood out to me as the player that improved the most. His touches are top notch. He really seems to be coming into his own as a player and I’m really happy to see him back with the National Team.

Jen: 14 – I think we’d all like to rank him higher, but this wasn’t his year.  Competent enough. Go Canada.  Better luck in the rankings next year. Fabulous halftime interview skills.

Richard: 10 – Goes missing too often but has an eye for goal and can create.