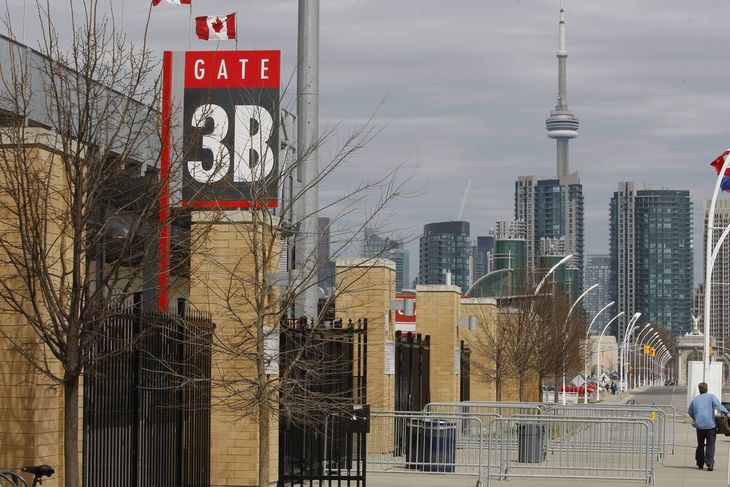 Staying outside for this one.

*Update: I wrote this piece last year over at Waking The Red and my views and my stance regarding this game remain the same.  As my thoughts on this will not change, consider this to be an annual post as it is unlikely that MLSE and Toronto FC will stop having this focussed event.   Given recent events I feel that this is more relevant than ever and something that we should look at more seriously. There have been changes since last year –  Yes, Rachel is no longer with the team and I’ve no idea if Sherri has done any type of similar promo for this match as I’ve long stopped viewing those. I do know that this years SSH package came with the tickets for this game stickered with a suggestion that we donate our tickets – you know so that you’ve got lots of advance notice.  And there of course have still been the emails and the announcements at games about donating your tickets; just in case we’d forgotten.  I only wish I got similar emails and heard similar announcements to donate my tickets to youth in need or youth groups or any other number of worthy people or charities throughout the season.  But that is not the MLSE way.

By now everyone is aware of what happened at the TFC match against the New England Revolution – a banner stating ‘Refugees Welcome’ was held up by a group of supporters at the top of 111 and were subsequently asked to take it down by BMO Field security.  Shireen Ahmed wrote this excellent piece about the incident – it’s well worth a read if you’ve not already given it a look.  Up until this morning the team and MLSE had stayed strangely silent on the issue.  The fact that supporters for other MLS teams were holding up similar banners with no issues, as well as an ongoing public outcry and attention in the media seems to have finally swayed them as banners with that simple message will be allowed this weekend (and presumably at other matches going forward).  Here is the release from the group behind the original banner:

Toronto, September 18, 2015 ­­ As Toronto FC players are preparing to face Colorado Rapids Saturday, hoping to stop a run of three defeats that have dealt a blow to their playoff credentials, fans of the team are celebrating a victory. Club officials have disclosed that a #RefugeesWelcome banner that supporters were forced to remove at last weekend’s game will be now be permitted at BMO Field, as will any similar banner. Fans unfurled the banner reading ‘Refugees Welcome’ during last week’s game against the New England Revolution to mark one week since Alan Kurdi’s death shocked the conscience of the country. This action follows a wave of similar actions that have taken place across Europe at football matches. See images here. That is until BMO field security personnel were instructed to remove it, citing a restriction on banners outside supporters sections, despite the fans in question being seated in designated supporter section 111.

In response to the National Post earlier this week, a representative for Maple Leaf Sports & Entertainment (MLSE), which owns and operates Toronto FC, went on record saying “As per both venue and league security policies, banners containing political messaging of any kind are not permitted.” There now appears to have been an about turn with Dave Haggith, Senior Director of Communications at MLSE, writing to the fans who held the banner saying, “This situation is different… We felt that ‘refugees welcome’ is an important humanitarian message as opposed to a political one. If the banner just promotes the ‘refugees welcome’ message, it is fine to use.”

The fans who made the banner have been left confused by the mixed messaging but are pleased they will be allowed to fly it at this week’s game. Edward Wong, a season ticket holder and fan since the formation of the club, says, “To say RefugeesWelcome is a political choice. It means to support the call for open borders for refugees and migrants and an end to causes of mass displacement. When the club unfortunately censored the message that was also political. Whilst we don’t claim to speak for all TFC fans, we’re glad that supporter expression has been respected in this case and look forward to the game on Saturday.”

Fans from other Major League Soccer clubs have displayed similar messages at recent games without incident, including during the New England Revolution’s game Wednesday evening, where fans held signs in a direct response to incident in Toronto. A #RefugeesWelcome rally is being held downtown at the same time as the game Saturday.

I’m pleased that this at least has been resolved and that this simple, humanitarian statement will be allowed at games; but as I said at the beginning, my views remain the same and I’ll be far away from BMO Field and my fellow supporters and denizens of 117 this weekend – below is my original piece from last year:

This weekend I’m doing something that most people that know me would consider unusual, if not almost unheard of; I’m deliberately missing the Toronto FC match.

I am a considered by most to be a fairly die-hard TFC fan; I write, tweet and podcast about the team. It takes up large portions of my free time and the people that I spend time with at games are among my best friends. Which makes my decision to deliberately miss a match even more difficult; and yet I will not be in my usual spot in the south stands this weekend cheering on my team.

And it’s not for any of the usual reasons that people have for missing something like this – it’s not due to work, family, illness or any other obligation. No I will miss this match (and have missed similar matches each year) for one simple reason: it is Canadian Armed Forces Day.

If you know me, have read what I write or listened to me podcast, you know how much the heavy focus on marketing ploys, sponsored everything, but most especially special event (or promotional) nights at TFC matches have grated on me (and others). The constant circus has become increasingly invasive and overwhelming in the past couple of years culminating in sponsor overload this year – every tweet must be sponsored!  There is no end to the circus, no lessening of the barrage.  What is wrong with just enjoying the game without the circus?  Why can’t we just be? And yet, still I go to games, tweet, write stories and podcast; so my sensibilities must not be too offended, right?

Even in the face of wave after wave of pandering to various groups I still show up every week. Because it is pandering – make no mistake – the underlying motivation isn’t to build bridges to the community or to honour a specific culture. If it were they’d do more than just have a few of the Bud Girls dressed up on the King Patio along with a few other representatives from that week’s ‘honoured’ nationality out to entertain the patrons of the sponsorfest that is the patio.  While the rest of the fans at BMO Field see nothing that relates to this celebration of another culture.

Why is that? Because there is no half-time celebration or show with the exception of cringe inducing accent contests that have nothing to do with that night’s honoured community.  No, there’s nothing for the fans that don’t want to knock back $5 bottles of the preferred sponsor’s beer.  In fact on Italian Heritage Night how did they celebrate this part of our community? They gave out boxes of Primo Pasta after the game… It’s mere lip service and were it not for the constant tweeting and emails from Toronto FC, you’d never be able to tell it from any other game. And yet I still go to the games and support my team.

So what makes Canadian Armed Forces Day different from the others? Other than the fact that it’s just another level of pandering – in fact if you want to see how seriously MLSE & TFC take this, watch Rachel’s latest video – where is Doctor’s Night? Paramedics Night? Teachers Night? And so forth. Why is it alright; no ,why is it expected that this group is to celebrated and thanked? Why these men and women and not any others?  Why not honour or celebrate those in need?

I acknowledge that MLSE and TFC do charitable works around young people and sport, important and helpful work – however I don’t get multiple emails about donating my tickets to needy kids so that they can come see a game.  But for Canadian Armed Forces Day?  I received constant email reminders to donate my tickets so that a member of the military can attend the game.

So why is it different? Why do I stay away from the team I love on this day?  Because this promotional event isn’t just marketing – or I should say it’s not just half-assed attempts to honour some group – oh no, for this day they pull out all the bells and whistles.  And why do they go that extra mile, that extra step?  Because at its heart this is the glorification of the military dressed up as fun event.  Making the military seem like something shiny and fun (again, watch the video), should have no place at sporting events.  Because no other group gets this kind of treatment and showcase at public events.

This year they’re taking the exploitation and glorification to new heights: Wristbands (but only for the first 7000 – no one else gets to celebrate), a special pre-game ceremony AND a half-time show! Hey, guess those other special event nights weren’t that special were they? And the capper is the one that I’ve been waiting for since the Canadian Armed Forces Days were started – special kits with camouflage numbers on them.  It is not enough to have fly-overs (presumably while Kenny Loggins blares throughout the stadium), fireworks, special shows – oh no – now we’re going to ask our players to wear kits that mimic military garb.  This should not be.  They are not soldiers, we are not in battle, this is a game – a GAME!

In today’s world where people wear camouflage as fashion, where military lingo permeates every aspect of our conversations – most notably in the media and business worlds – and where a small town police force thought it was acceptable to get a tank to deal with some protesters, it is more important than ever that the line between the military and everyday life be made clear and not wiped away.

Marching bands, fireworks and faint applause do nothing to change that this is just blurring the lines between the two worlds.  Handing out wristbands shouldn’t make war and death and strife acceptable and entertaining. Athletes sporting camouflage should not turn into people clamouring to buy the latest special kit from the merchandise stalls.  Because soccer is a game, it’s not war.  And war isn’t a game and nor should it be celebrated at one.