In a nutshell : vanilla, not gaudy, but may be limited-time special

If there is one time-honoured tradition with the internet, it is the perpetual gift that is “the leak” and today the gift arrived early.  I admire MLS feeding my desire for new kits and designs by trying to make a big deal out of this nerdy-niche thing, but it should only be a big deal if they come up with something special.  Otherwise, just release them already.

Today, bundled up and delivered to the twitterverse by @3rdDegreeNet was news of the Toronto FC new home kit in, what appears to be, a screenshot of the MLS online shop, and entitled “New @torontofc home kit”. 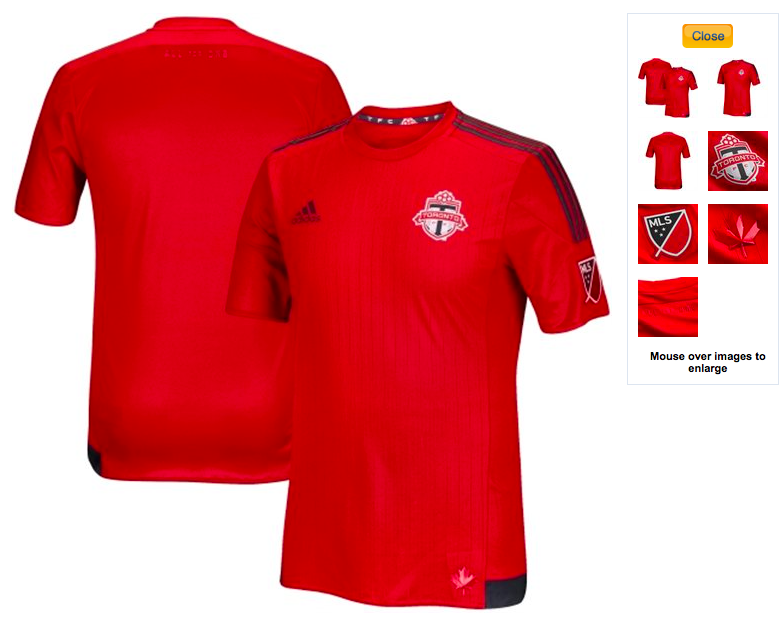 The front of the kit is very ordinary.  Gone are the polygonal maple leaf imprints that littered the fabric, they are replaced by a much simpler pin-stripe within the fabric.  The co-opting of the national symbol has not been fully eradicated (and maybe never will) as an embossed tag at the bottom right of the front of the kit keeps the maple leaf in place.  Also, the mandatory flags on the arm have been supplanted by the home club pallet friendly MLS badge, which looks kinda nice.

The Adidas and MLS partnership continues to deliver unnecessary extras on the kits as the inside collar has the pentagonal-leaf pattern with the club initials on a strip that runs the width of the back of the neck.  It’s an odd detail, something to be worn by, presumably, opaque persons, but those transparent ones will certainly gain the benefit of added flair for their shirts.  To be fair, it could be bad or much worse.

I could see how anyone might suggest that this is a training top, because it’s just so bland, but based on the other leaks that are floating out there, the ‘ringer t-shirt’ style collar appears on most of the newer kits.  Also, it isn’t common for Adidas to present a design where the three stripes don’t jump off the kit.  The contrast is fairly uniform in their releases, but this one bucks the trend.  I’m OK with something different.

If you’re wondering why this might be the kit to get, allow me to preface this with the reminder that Toronto FC is owned by MLSE, whose corporate motto is “Don’t You Fucking Dare Leave Money On The Table Ever”.  Probably. 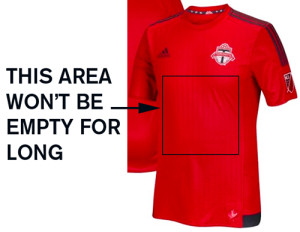 That’s right kids.  This may be your chance to fling yourself at not being a walking billboard.  If these suckers go on sale without a sponsor, it won’t be sponsor-free for long after that, so get it quick.  This kit gets an extra point for being sponsor free.  And you know it’s coming.

Pick your poison, they’re all plausible.

There you have it.  I would have liked to see some kind of a simple pattern in the print beyond, what appears to be, embossed pinstripes. Using more of the dark grey wouldn’t have been terrible, perhaps as a cuff at the bottom of the shirt.  I do like the subtlety of the swatch of dark grey on the sides of the shirt.  That’s a nice touch.  Like that the light grey isn’t on the kit again.

Get if : You want, what could be, THE classic kit.  It may be plain, but if it has no sponsor, then it’s legend. Also, if you don’t want to draw attention to yourself. Also if you’ve always wanted to look like a TFC employee working a charity golf event.