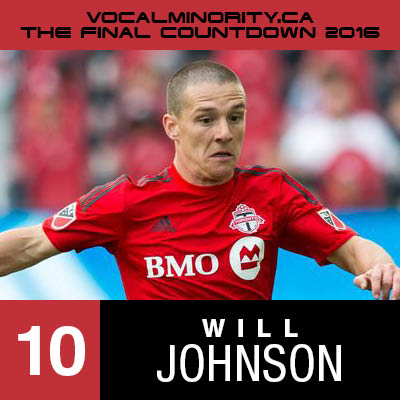 Duncan: 11 – A shame about the injury as he’d had a decent first half of the season. By the time he was fit again, lost out in a numbers game as we just have too many similar midfielders, so letting him walk as a free agent kind of makes sense really. Forever a part of club folklore for breaking his leg while scoring the cup winning goal.

After the 2015 season, it was obvious that Will Johnson was going to leave Portland and the ‘where will he end up suspense was definitely teased out for a while before it emerged that it was Toronto who’d won, via a conditional 2nd round pick and an unspecified amount of TAM.  Another impressive experienced MLS player brought in, and a Canadian international on top of that. Excellent. Sadly it didn’t quite work out.

When he was actually playing it generally went well, and he was a big part of the decent showing on the 8 game road trip and the decent opening to the season. He had a goal and 3 assists by the end of that 8 game stretch, the goal coming narrativetastically in Portland, with a comical celebration of at first raising his arms and going for a run then after about a second he seemed to realise where he was and instead did the not celebrating thing.  His other league goal came against New York City, a tap in after good work from Mo Babouli and Josh Williams, and he ended up with 5 assists in league play as well.

His good first half of the season was capped of course with his Voyageurs Cup heroics, scoring the goal that took the reds from defeat to victory, in injury time, legendary stuff even without the fact that he broke his leg in the process.  By the time he came back from that injury of course, Armando Cooper was here and so it was that Johnson just never really found his way back into the first team, instead being a regular substitute through the playoff run.
This was mainly due to a problem that one astute local writer mused about at the time of his signing, where exactly does he fit into the team, what exactly is his role?  Not really a wide player or a number 10, the 4-4-2 diamond was always a bit too narrow really and he was partly the cause of that, and when the switch to the 3 man midfield ensued, well Osorio and Cooper were both more suited to the 2 spots ahead of Bradley. The bench was probably his natural place, and to be fair, he’s a great option to have on the bench, but in a top heavy squad with too many big salaries, having one of the biggest being a bench player is kind of problematic, so though I’m sad to see him go, I’m not too sad, depending on who gets brought in, the squad makes more sense without him.
Of course he went out with a bit of a bang, admitting in a Star article that he didn’t really try and come back due to feeling disrespected with how he never got back into the lineup after his injury, that TFC went out and replaced him with Cooper. He then clarified a little in an interview with Anthony Totera, walking back some of what he said, but then making it very clear that his issue was with Greg Vanney and his style of coaching just not working well for him. I’m very intriuged but I’m sure we’ll never hear more detail than that.
Anyway, best of luck to Will in Orlando, though it didn’t work out ideally, he was a big part of the best season in club history, and that Voyageurs Cup winner will be a moment of TFC folklore for a long long time.
Let’s watch it one more time, the reactions of Waston, Robinson and Ousted are still as magical as ever.

Kristin: 9 – I was so excited when Will joined the team and I’m sad to see him leave.  Will miss his tenacity on the pitch, his Jedi mind control over the refs and it’s sucks to lose a solid MLS vet.  But that goal – thanks for the sacrifice Will!  Break a leg in Orlando.

Tony: 9 – Mr.Glass may be gone soon but will always have that goal

Mark: 10 – “Petulant angry kindergartener’s face” and “destroying himself to win V-Cup” will be his legacy.

Mark HSV: 9 – Poor Will, who lost his starting spot to Cooper. I think he is the better all around player and it’s sad to see him go. His leg-breaking Voyageurs Cup winning goal was epic.

Duane: 14 – Distractions behind the scene and injury make lower ranking.

David: 9 – Will was the odd man out.  Up to his injury he was so strong, but lost out to summer pick-up Cooper.  I hope he can be picked up for 2017 to give us what veteran presence in the mid when called upon.