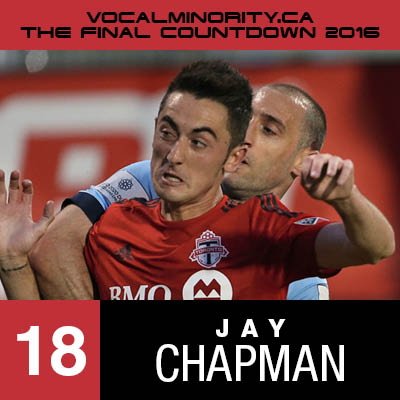 Duncan: 14 – Showed glimpses of talent, then crucially got a long run of games and once he seemed settled in and believed that he belonged there he looked very very good indeed. It’d be a gamble to try him as the creative midfielder TFC need rather than bringing someone else in, but I wouldn’t be against Vanney and co trying that next year.

Going into the season, TFC seemed to have built themselves a decent first team, but the depth was going to be a big question mark. What was going to happen if injuries hit, or international absences went on too long? Some of the kids were going to have to step up, and some of them did, and Jay Chapman was probably the best of those.

It didn’t immediately show as in his first few games he looked a little tentative, safe, unwilling to take chances on something really creative. All fairly similar to many of the young kids that have come into the first team squad whether through the academy, or via a somewhat dodgy homegrown status.

What he got that most others over the years didn’t get was an extended run of games thanks to the Copa  America, and eventually something clicked. He clearly looked like he realised that he belonged, that he could play at this level, and that he could be bringing out the skill and confidence that had brought him to this point.  Players returning from injury or internationals and the arrival of Armando Cooper meant he got bumped down to the bench when he didn’t have his own injury to deal with, and he very rarely saw any action at the end of the season or the playoffs, but in that mid-season couple of months or so, there was real potential shown.

There are a few places in Toronto’s squad where you’re probably thinking they need to do better, I’d say the need a good wide midfielder/winger, another experienced decent MLS level central defender, a new back up right back and a creative midfielder, a number 10 which we seemed to lack towards the end of the year.

As much as a big signing would be exciting, hopefully that comes in other areas, I’d love to see management give Chapman a chance to make that position his own. He may not fit perfectly into the 3-5-2 we saw in the playoffs, but if the old diamond midfield gets trotted out again, put him up at the top of it and give him a chance, there’s always the summer window to find other options if it doesn’t work out.

As Matt Doyle says here. “Putting Chapman behind two of Jozy Altidore, Sebastian Giovinco and Tosaint Ricketts should lead to LOTS of goals.”

And that’s the thing, he looked good right in the middle of TFC’s injury crisis, he was generally playing with Mo Babouli and or Jordan Hamilton up front rather than a firing on all cylinders Jozy Altidore and magic off the bench Tosaint Ricketts, and he still put up very good numbers when it comes to passing and chance creating, as noted in this waking the red article. Imagine the assists he might have got if playing with the first choice lineup.

Here’s probably the favourite moment I can remember from the season, a beautifully delayed 1-2 with Giovinco that led to a goal against Columbus. Who wouldn’t want to see more of that next season?

Kristin: 15 – Started like a deer in the headlights, but finished the season having changed my mind – look forward to seeing him progress this season.

Tony: 19 – His leather jacket and white shirt will haunt my greaser dreams.

Mark: 21 – You can see there’s some serious quality in this kid.  Flashes of sublime vision.  Wish big things for him.

Richard B.: Never impresses me

Mark HSV: A good player but didn’t see much of him as the season went on. Lots of depth in midfield though, so not surprising. I expect to see him and Delgado play important roles in the future for TFC.