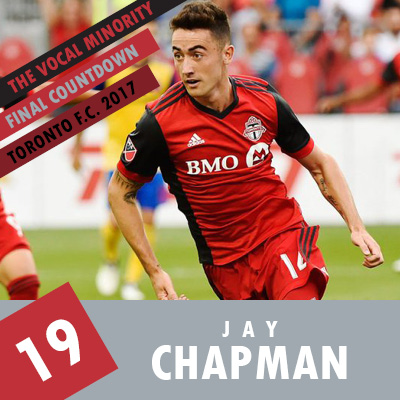 Duncan: 18 – When thinking about the 2017 season, there are very few things that make me kind of sad. Jay Chapman is one of them.  There was such promise shown in 2016 when he finally got what few of TFC’s lauded academy projects get, consistent playing time. Here’s me in the 2016 season version of this gushing and getting ever so slightly optimistic that it might translate into consistent playing time and a proper flourishing of a player who could be a big part of the team for Canada.

But even then I knew, deep down, that wasn’t how this would work, and of course Victor Vazquez was brought in and took up all those minutes Chapman might have got. Now don’t get me wrong, Vazquez had a much better year than Chapman would have, I’m not going to argue that, I like Vazquez, we all do, but it’s all just very disappointing. I get it, much like their seeming hostility to someone else setting up a CPL team in the GTA is just them doing what they have to do to defend their monopoly cos that’s what’s best for them, TFC have to do what’s best for TFC. Bez and Vanney have to do what’s best for TFC and their own job security, and it certainly worked out well for them and the club. Who cares about Canada? Not the club, not if it goes against ruthlessly pursuing their own interests, which they absolutely should do.

It’s very much part of the reason I grow more disillusioned with TFC despite them actually becoming successful. Back in the day I had hopes and ideas of plenty of Canadian kids being helped by TFC, and making their way up to the first team and being given a genuine chance and some of them making it, and that really helping out the national team. It’s a romantic ideal that management sold us and still sells us, but let’s  face it, it’s not going to happen is it? Canadian Premier League, for all the flaws and disappointments it will inevitably have, can’t happen soon enough for me, and if I fully dump TFC in favour of some as yet unknown CPL team, Jay Chapman’s 2017 season will be a very good display of why.

Anyway, Jay Chapman, what did he do this year? Not much really, didn’t get much of chance did he?  And without that run of games he didn’t really reproduce the form he showed last year, the odd good moment but no really impressive game I can remember. 385 minutes in the league, and hey he did at least score a goal, that’s something. A scrappy build up, but then a good finish, not snatching at it, but instead heading it across goal and away from the goalie and defender on the line, very coolly placed.

He almost scored another against New York when Ben Spencer had an open goal and somehow managed to instead head the ball back across goal and it bounced in off Chapman but was ruled out for offside. Enjoy that nonsense here.   In the Voyageurs Cup game against Ottawa he got 90 minutes, and managed to set up a goal. For Ottawa, with an absolutely preposterously dumb pass that went wrong.  He rather conspicuously did not play in the other 3 games of that tournament.

Disappointing season then, but there was at least one last bit of entertainment to come at the MLS Cup parade, where he was clearly absolutely fucking hammered, walking off the bus into Nathan Phillips square carrying beers and one of those little mini fridge bottles of liquor, clearly enjoying himself. I’m almost surprised he didn’t fall off the bus, and I’m just disappointed he didn’t make a speech.

I really hope he eventually finds a situation where he gets a long stretch of games in the first team somewhere and can really develop the potential he’s shown, but I doubt that’s going to be with TFC is it? Any time now CPL, any time.

Tony: 18 – Didn’t quite have the breakout season some predicted but still looks like his career is on an upward trajectory . Bonus points for being wildly drunk at the MLS Cup parade . Hoping his eyes are now both facing the same direction once again .

Kristin: 19 – Much lower than my rank from last year, but purely based on lack of minutes, which is not his fault.  Honestly once they signed Vazquez it was going to be hard for Jay to get much time, but hopefully will see that increase in the coming year as we’d like to see the Jay from last year.  Also, more ‘drunk at parades’ Chapman please.

TweetKred: 17 – Poor guy trying to break into our midfield right now. I remember him being solid when called upon but nothing stands out in memory.

Alex: 16 – Showed glimpses of raw talent and promise, will need to find a role within squad for next season.

Jeff: 21 – We like J-Chaps but it seems like he just can’t turn his progress in training to quality minutes on the pitch – hope he can make the jump to be a consistent contributor, just not there yet.

TuffyRocks: 20 – Needs to do something big when he gets called on to sub in.

JordyLike: 19 – Has shown signs of promise, but thoroughly confused as to what position we want him to play. Flashes of great and poor play at times, but still young and looking forward to him.

James: 22 – Chapman, like others in this portion of the list, are forced to bide their time. While it can be frustrating, both for them and those watching who want to see young Canadians excel, Jay goes to work every day, training with and learning from some of the best in the league. That is worth something. His first MLS goal was a measure of symbolic progress; expect to see him earn more minutes next season.

MarkHSV: 20 – A step back this year for Chapman, but really the midfield was too stacked to give him much of a chance to play.

Steve G.: 17 – A player who has huge upside that is still to be untapped. Perhaps the most unlucky player on TFC? Ready to break though in 2017 before the team signs Vazquez, virtually making him the 6th MF and limiting his minutes to almost 0. And then, in his biggest game and biggest moment, he has a freaking killer goal called back for no reason.