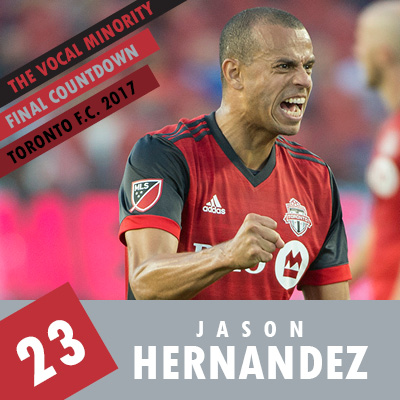 When Hernandez arrived in the very early season, he was signed as a free agent after a two-season spell at NYCFC, with the role of journeyman substitute defender, firmly his for the taking.

He knew he was going to be in tough competition for a starting spot, with Vanney leaning towards 3-5-2 and needing to get through the pecking order of Moor, Hagglund, Mavinga and Zavaleta ahead of him.  The Puerto Rican international managed to make nine appearances, with 6 starts, for the club, and from my memory, he was a perfectly capable substitute defender.  Far from perfect, but far from calamitous.

As of writing, he’s an unrestricted free agent and no longer appearing on the Toronto FC site roster.  Maybe he’ll land somewhere else in the league, but it’s fair to say that he did what was expected of him, and hopefully the 35-year old gets another season.

Duncan: 22 – Decent pick up, veteran depth and all that, and I don’t remember him doing much wrong at all. Doing good things for Puerto Rico, but can’t really remember much of his year aside from that.

Kristin: 22 – Hernandez is the kind of player you want as depth – solid veteran, did well during the summer when absences and injuries weighed upon the team, seems well respected.  Nothing snarky to say really.

JordyLike: 25 – One of the fewest minutes played, one of the most excited on the bus during the cup parade. Serviceable, and I thank him for his service.

MarkHSV: 22 – A valuable back-up defender when called upon. Was solid even though he’s not the speediest guy out there anymore. Didn’t see him make any mistakes though!

YellingAtSoccer: 24 – I remember him, I guess that’s something.

Alex: 21 – Solid defender who played his part within the squad perfectly.

Mr. Tuktoyaktuk: 25 – Part of the summer reserve who held down the fort, did his part.

Jeff: 19 – Role player 100% – limited minutes but  I could see he had exactly the right attitude – add a guy with a winning mentality even in a support role and you raise the level – I’m sure he pushed everyone in training all year – hope he hangs around.

TweetKred: 19 – When I saw a defender was picked up from the team we torched 7-0 over two legs last playoffs I wondered what was up. He was necessary when our backline needed more steel to close out games. Without a lot of play he was always ready to step in with a solid performance.

James: 20 – Heading into the grind that is an MLS season, one knows that it is the first 15 names or so on the roster that will carry the day. The key is finding guys to fill in the rest that, when called upon, can contribute and make sure the level does not drop, while being good teammates and dogged trainers in the background. Hernandez is that consummate professional. Acquisitions such as his are both invaluable and impossible to quantify. The margins are thin in MLS, every bit counts.

TuffyRocks: 22 – A suitable stand in and a serviceable MLS D man.