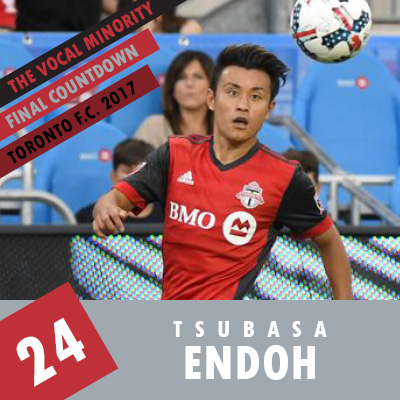 Tony: 24 – 2017 seemed like a step backwards for the affable Japanese forward.  His limited playing time in 2016 became more so,  Perhaps it was TFC’s depth or perhaps we’ve seen his peak. The Endoh is nigh.

It’s hard not to have a soft spot for Tsubasa Endoh. He’s from Japan – which means he’s from the future; his name his hella fun to say in a crappy movie samurai voice; he’s a wee fella with Japan National team hair styles; and, he always looks pretty happy to be here. Or anywhere for that matter.

That being said, 2017 wasn’t really a banner year for Endoh. Promising signs shown in 2016 failed to evolve into anything that could be regarded as development. Perhaps that had as much to do with the depth of TFC as much as the player himself. But, like a used panty vending machine in a Tokyo railway station – if you don’t whip out something new, people will lose interest.

Four 2017 appearances and a single assist later and you’d be hard-pressed to imagine Vanney & Co. regard Endoh as anything more than deep depth – if that – going into 2018. There are a lot of young bodies demanding minutes in the forward positions and heading towards 25 years old, he will need to show more. Perhaps the stresses of Champions League may give him the reprieve he needs.

But, he’s already been in the future so he knows what happens already.

Duncan: 25 – Went out for dinner with Benoit Cheyrou a lot, that’s nice. Played a few games, did some running about and didn’t really have much of an effect at all, though in the home game against Ottawa he had a fantastic ten minutes, scoring a goal (a header!) setting one up and having another shot go just wide. Time to fall on the old ceremonial sword I think.

Kristin: 24 – Love the bromance that he and Cheyrou have going, but other than that?  We didn’t get to see much of him with the first team.  Saw some good things from him at TFC II but difficult to think he can crack the starting XI (or the eighteen) on a regular basis this year.

Alex: 22 – Never regained Rookie form and was left to play in Vaughan mostly.

Ruchesko: 27 – Too patchy for the big leagues, but deserves better than TFC II. Time to move on, maybe the J-League, if not Montorioru Inpakuto?

TweetKred: 24 – Frustrating player to watch. Looks like he’s running in quicksand up to his chest and my good we do not need another cross into the 6th row of seats behind the goal. Another player with so much potential that just doesn’t seem to be going anywhere. If not for the TsubaRou connection he would have been invisible to me this year.

Aron: 18 – Not very active this year, so not very high up this year.

MarkHSV: 23 – A step down for Tsubasa this year after some promising games in 2016. He’s not bad, but not good enough to start ahead of others on this deep squad.

James: 26 – Endoh has found himself a man without a spot since coming into the side with such ferocity as a rookie last season. His minutes were few and far between with the first team, though his contributions to TFC II were impressive.