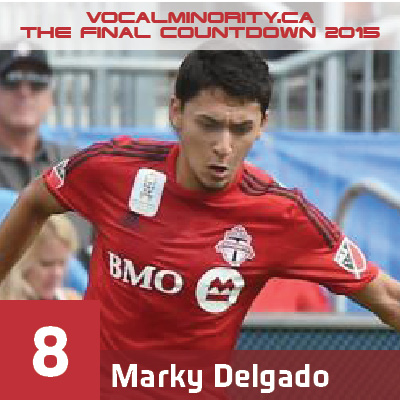 Duncan: 7 Delgado was one of the few players in the Chivas death draft who looked interesting and worth a flyer, so it was a bit of a surprise when other teams passed on him and he was still there for TFC to pick up. Despte the nonsense of a grown man still going by ‘Marky’, I’m happy they did. It took a while for him to get into the starting lineup, his best run of games came when the Gold Cup was on and he filled in towards the top or left of the midfield diamond. He was never super noticeable, but always tidy in possession, working well especially with Osorio and Giovinco and with a good habit of popping up in the right place to finish off a move, getting the 4th goal in legendary historic Yankee Stadium, and then the first goals against Philadelphia and Orlando, giving him more goals than Robbie Findley this season (we may or may not have mentioned this before).

Of course, players came back from the Gold Cup, and the season stumbled along it’s clumsy and disorganised path and thus Marky became the latest contestant in the great TFC game show ‘He’s! Not! A right back!’ Much Like Creavalle before him and Jackson after him, Delgado wasn’t terrible, and certainly not entirely to blame for the fact that it didn’t work out, put him in as an emergency right back in a settled defence in a competent team and he’d probably look alright. Alas, TFC weren’t and he didn’t.

It’s a bit of a puzzle as to why he never got back into the team in midfield, Vanney instead preferring the more attacking option of Robbie Findley on the right, even though he really wasn’t helping out Jackson at right back (or delgado before him). It was the Montreal games that of course exposed that weakness ruthlessly, and you can’t help but think that it might have been wiser for Vanney to put Warner or Delgado in that midfield spot to provide more defensive help in that historic playoff game. Alas he didn’t.

Delgado is set to be back next year and it’ll be interesting to see how he’s used and if he can find a place in the lineup on a regular basis. Either way, he’s a very good player to have on the bench.

Tony: 13. Credit to Tbez for this quiet signing. More of these MLS gems was supposed to be the plan until they fell into old pricey habits.

Mark HSV: 10. A decent surprise for TFC, and hopefully a future mainstay in the lineup. I think he should have played right mid with Osorio at left mid, to give the team a nice balance of attacking midfielders on both wings. Bagged 3 goals, 3 assists and also put in a defensive effort.

Yelling at soccer 10. Scored, got some assists, worked well with Seba. A bit of a surprise

TC St Clair 8. Stepped up this year and contributed more than I thought he would. Few goals and assists. Some clever plays.

Jordylike 6. Best thing to come out of Chivas since that steroid goat, who I also wouldn’t have minded getting in the dispersal draft.

Zicogold 10. Should be a much better next year

Jason Anderson 7. I also wanted DC to grab him when he was out there. Stop stealing my ideas!

Ben Bromley 7. One of the two players I coveted from the expansion draft

Alex Lach 13. If the man could cross the ball, he would be our answer out wide. Has the skills to be successful modern wide player, creative, has a touch, not afraid to drive to the middle but should work on his crosses, just not there, lacked that service to our forwards that at times was lacking from TFC

Mike Newell 9. A nice little surprise this season, like Warner probably played more minutes than initially planned but was at times one of our best players, especially during that unbeaten stretch earlier in the summer. Has lots of room to grow and should be seen as a future building block for the club.

Enrico S 8. A good kid that showed some talent.

Aaron Bennett: 5. Delgado had a fantastic season. Showed vision and composure beyond his years.