Posted By Kristin Knowles on Dec 1, 2015 in News, Uncategorized | 1 comment 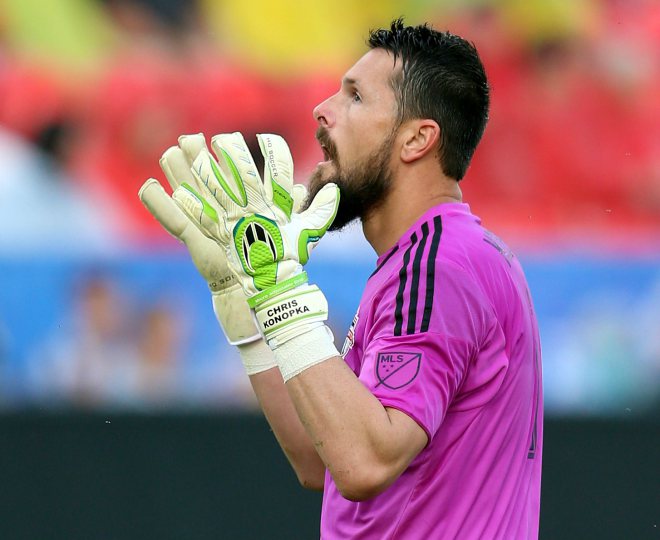 And so it begins.  After yesterday’s re-signing of Justin Morrow, Toronto FC wasted little time in releasing four players and exercising contract options to thirteen others.

TFC made a somewhat surprising move in releasing both Chris Konopka and Joe Bendik – the two had shared starting duties this past season and it seemed likely that at least one would be retained if only as back-up to a presumptive new keeper.  Most of us expected that Chris ‘Caveman’ Konopka would be the one kept; Konopka was an able keeper last season – sometimes spectacular, sometimes not – but on less than $70K he was a bargain. Bendik is a victim of a large contract coupled with average skills; decent back-up and a solid starter on a team with a better backline and midfield. But as we all know (and were painfully witness to), TFC bled goals last season so to see only the two keepers being let go is a bit worrisome; those 58 goals were certainly not just on Konopka or Bendik.  However it looks as though both Quillan Roberts and Alex Bono are to be given more time this season behind a new No. 1 keeper:

“We like both of our young goalkeepers so part of it is to start to create a pathway for one if not both at some point, to make their way through,” said coach Greg Vanney.

Also departing Toronto are Jackson (sad Klaxon!) and home grown player Manny Apparicio.  I suppose you can count Jackson as a defender; although not by choice and only by Greg Vanney and circumstances design.   However, he had some nice moments this year and was, at the very least, entertaining to watch.  As for Apparicio – he’s barely seen time since joining the first team and although has gotten some call-ups for Canada doesn’t seem to be progressing much.  Hopefully he catches on somewhere during the re-entry draft.  And lastly, it looks as though TFC will not be offering Robbie Findley a new contract (his expired at the end of this season) – not many will be saddened by this news, although there is still a small chance that Bez & Co. will offer him (or any of the other released players) a contract at a severely reduced rate as part of the re-entry draft process.

“Stability at this time is of the utmost importance. This represents the highest number of returning players as we look to build on the positives from this past season,” Toronto GM Tim Bezbatchenko said in a statement. “We have a strong core group of players that have gained valuable experience over the course of the season. We will use the offseason to add to our group and continue towards our goal of becoming consistent contenders.”

Stability for team building, development and improvement purposes is great – this team has never hung their hat on stability, no matter how many times they’ve said it’s key.  Those twenty-four players could be that foundation – although there is more than one question mark on that list – and if that’s the case then that is cause for some positivity going into next year.

However the flip side of this list is lenthgy and expensive contracts that can’t be jettisoned at this time; stability by choice is great, but there is a smattering of ‘we’re stuck with them so let’s put a good face on it’, happening with some of the players.  Ahmed Kantari is of course the one that sticks out the most in this case and there is a chance that Bez will employ the league Get Out of Jail Free card to buy out his contract.  But other middling pieces and under-used/under-performing players are still a large part of this roster – whether the best can be coaxed out of them in the upcoming season is unknown.  That is of course on Greg Vanney’s ability to adapt and learn; and if he doesn’t do so quickly…well, we know how that goes.

Don’t expect too much in the way of blockbuster signings this year; a new keeper, possibly a new CB and DM and well, that’s likely it.  Anyone else feeling a bit nervous?   This season hinges on who they get to fill those roles (as well as figuring out where the hell Michael Bradley is going to play).  Guess what guys, we may well have the roster set by mid-December!  Crazy right?  Well, at least there’ll be fewer new names to know this year.   Thanks for everything to Konopka, Bendik, Jackson and Apparicio and good luck wherever you land.